Situated on the north east coast of Cantabria, Noja and its surrounding villages are better known for its beaches and mobile homes rather than its football (A sort of Burnham-on-Sea without the funfair and donkeys). Organised club football first emerged in the 1930’s in the shape of Brusco Sport who played on land to the south east of the town, next to the Playa Trengandin. The Civil War put pay to any aspirations that Brusco Sport may have had, but in 1940, the municipality developed their old pitch and renamed it La Caseta, that’s the shed to you & me. Three years later, Noja CF was formed and at their peak, played in the Segunda Categoría of the Cantabrian league. Noja CF folded in 1949 and over the next decade, La Caseta served as home to a series of minor clubs.

Buoyed by the success of its club and national sides, the early sixties was a renaissance period for Spanish footbalI. On the back of this wave of enthusiasm, many new clubs were formed, one of which was Sociedad Deportiva Noja who saw the light of day in 1963. By 1968, SD Noja had reached the Segunda Regional and to commemorate this, the municipality refurbished La Caseta’s facilities  and added a narrow cover that extended for 50 metres down the west side of the enclosure. It took another 20 years for the club to progress through to the Tercera, and when it did finally reach the fourth tier, it proved to be a struggle. Four seasons of low placings finally ended with a drop back to the Regional Preferente in 1991, but a year later SD Noja returned to the Tercera and have never finished lower than seventh since.
Sociedad Deportiva Noja won promotion to Segunda B for a third time after a comfortable 4-0 aggregate victory over Catarroja in June 2012. The two previous visits in 98/99 and 02/03 saw respectable performances, but ultimately ended in relegation. Since the turn of the century, Noja has dominated Group III of the Tercera, winning the title on eight occasions, but has only progressed through the play-offs on two occasions. With just 400 club members and a minuscule budget, SD Noja was always likely to find life tough in Segunda B, but a respectable ninth place was achieved at the end of the 2012-13 season. The financial pressures of playing beyond the Cantabrian borders came home to roost a year later, when the club finished bottom of the league. Coupled with the failure to clear wage debts, SD Noja was demoted to the regional preferente.
To say La Caseta is a touch primitive is in fact gilding the lilly. Its facilities are probably on a par with some of the more basic stadiums found in the eighth tier of English football. The fact that it can be found at the same level as stadiums that have hosted the National Side is one of the appealing, idiosyncratic quirks of Spanish regional football. La Caseta has a capacity of 3,000 with the only cover provided by the 50 metre stand erected in 1968 and a squat 20 metre stand on the east side, which backs on to one of Noja's many mobile home sites. This is hardly ideal for watching football in one of Spain's wetter regions. The club's changing facilities sit in the north west corner of the ground and as is the case with all of the basic structures in this enclosure, it has been daubed with liberal amounts of green and white paint. If you like your football venues to be rural and a throw-back to much simpler times, La Caseta is for you. If that's not your cup of tea, but you find yourself in the area during the football season, do pay a visit, but make sure you bring an umbrella! 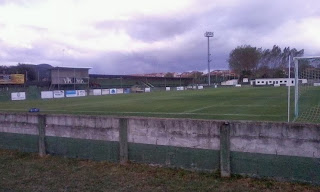 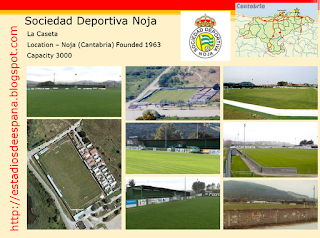