Back in 1933, a group of fishermen in the small village of Los Cristianos formed a football team. The team, Club Deportivo Marino, was one of the first to be founded in the south of the island of Tenerife and back then, homes matches were played on the esplanade next to the Playa de Las Vistas. A lot has changed in the intervening years. Los Cristianos has now been swallowed up by the sprawling holiday resort that is Playa de Las Americas and CD Marino moved to its municipal athletics stadium many years ago. However, those fishermen would still recognise the anchor on the club crest and be able to relate to the spirit that has just seen the club win promotion to Segunda B.
Whilst Marino's achievements have been modest, they have always been one of the footballing stalwarts of the Canary Islands. Properly established in 1936, Marino became a founder member of the Preferente de Tenerife a year later, and played in the first ever season of the Canary Islands Tercera division in 1980. By then, Marino had moved to their current home in Playa de Las Americas, the Estadio Antonio Domínguez Alfonso. This rather featureless municipal sports stadium was opened in September 1969 and featured three sections of raised concrete bench seating that started in the south west corner and curved around the west side to the north west corner. This overlooked a cinder athletics track and the club's first natural grass pitch. The remaining sides of the stadium were made up of open grass banks. It was here that the club achieved its first notable success, winning the Tercera title in 1987-88, and with it promotion to Segunda B.
Over the next four seasons, Marino held its own in the third tier of Spanish football, achieving mid-table finishes. Their stay in Segunda B came to an end in 1993, when the club finished bottom of a 19 team division, winning just 3 of its 36 fixtures. Financial irregularities ensured that Marino dropped a further division to the Regional Preferente. Another poor season followed and the club found itself marooned in the Primera Interinsular-Tenerife for 4 seasons. Marino then spent the better part of a decade in the Preferente, before reappearing in the Tercera in 2008. A fourth place finish in 09-10 saw the club enter the play-offs, but a 0-3 aggregate defeat to the Aragonese side La Muela, saw Marino stay in the Tercera. The club's second Tercera title was won at the end of the 2011-12 season and a 4-2 aggregate victory over Fuenlabrada earned Marino a place in Segunda B for the first time in 19 years.
The Estadio Antonio Domínguez Alfonso has not changed a great deal in the two decades since it last hosted football in Segunda B. The main change has seen the addition of a roof over two of the concrete banks on the west side. This barrel-vaulted cantilevered construction was added in 2001, the year the municipality opened a training annex 50 metres to the north of the stadium, next to the local golf course. The rest remains unaltered, and all a bit spartan. CD Marino does at least fill all 7,500 places once a season however. For the past 14 years, the club has hosted the Memorial Sebastián Martín Melo tournament, with island big-wigs CD Tenerife in attendance. If CD Tenerife cannot successfully navigate the play-offs, they will pay a regular season visit to the stadium as well. 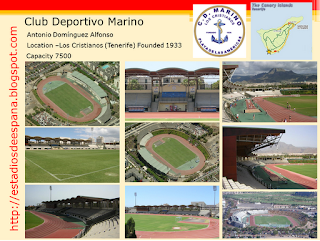