Fuenlabrada lies around 14 miles south west of the Spanish capital and over the past 35 years, it has witnessed an astonishing growth from a rural back-water of 18,000 inhabitants, to the region's fourth largest town, with a population of over 200,000. Formed in 1975, Club de Fútbol Fuenlabrada has not experienced anything like the growth of the municipality, but that's not to say that it has sat on its haunches for the past few decades. No, the club has pedigree, albeit in Segunda B and that is where it will be in 2012-13 after winning the Tercera Group VII and navigating the play-offs.
The club has the town's mayor to thank for its formation. Back in 1975, Regino Beneitez suggested that the two leading football clubs, CD San Esteban and AD Fuenlabrada merge, and over the next 10 years, CF Fuenlabrada made solid progression through the regional leagues. The club reached the Tercera in 1986, and although it flirted with relegation in the first season at this level, it soon settled into a routine of top five finishes, even winning their first Tercera title in 1992-93. The club lost out to UP Langreo in the play-offs that year, but 12 months later, a 2-0 victory over Bergantiños in the final match of the play-offs sealed promotion to Segunda B. Over the next 8 seasons, the club became a permanent fixture in Segunda B, achieving a high of sixth place in 1997-98, missing the play-offs to La Segunda by just two points. CF Fuenlabrada dropped back to the Tercera in 2001, but made a return to Segunda B two years later. Another sixth place was achieved in 2005-06, before the club returned to the Tercera in 2008, where it has remained for the past four seasons.
Home until the beginning of 2011-12 season was La Aldehuela, a collection of pitches with a  basic one-sided enclosure to the south-east of the town, close to the municipal cemetery. The first team played in the barely enclosed ground to the north of the complex, that featured a single terrace of a dozen steps along the southern side. Straddling the half-way line for 40 metres, was a propped corrugated aluminium roof, under which was the stadium's only concession to comfort, a few hundred bucket seats. The stadium's changing facilities were housed within the bowels of the terrace. During the summer of 2011, the club moved a few miles to the west and a new stadium built in honour of the town's most famous son. CF Fuenlabrada played it's last match at La Aldehuela on 8 May 2011, drawing 1-1 with Colmenar Viejo.
So who is the most famous person to come from the municipality of Fuenlabrada? One Fernando José Torres Sanz or El Niño if you're feeling over-familiar. Although born in the town, Torres never played for CF Fuenlabrada, having been snapped up by Atlético Madrid at the age of 11. In 2010, the local municipality drew up plans for a sports city to the west of the town, close to the existing athletics stadium. Built at a cost of €4million euros, three-quarters of which was funded by government grants, the Estadio Fernando Torres is the centre piece of an impressive Ciudad Deportiva. Torres visited in the complex in March 2011, receiving the town's top civic honour in the process. Unfortunately, he was away on international duty when the stadium officially opened on 1 September 2011, when CF Fuenlabrada entertained his old beau Atlético Madrid.
At present, the stadium comprises of a full length raised stand on the west side of the arena, with a single tier of 1800 blue seats. All of this is housed under a blue cantilevered roof that hangs high over the seating in order to accommodate large media facilities at the rear of the stand. Temporary seating currently occupies the areas behind each goal, raising the capacity to 5,000, but there are plans to turn these into permanent banks of seating. All very impressive and with this in place, you can't help but think the CF Fuenlabrada is on the up, and could be the next little big club to emerge form the Comunidad de Madrid. 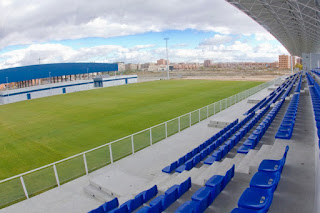 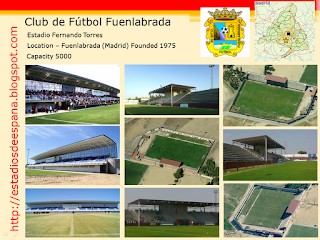