Do you recognise these stadiums?

Here's a bit of a brain-teaser for you. All of the stadiums pictured below have staged matches in La Primera at some point in their history. So do you know the name of the stadium and the resident club? Simple... eh? 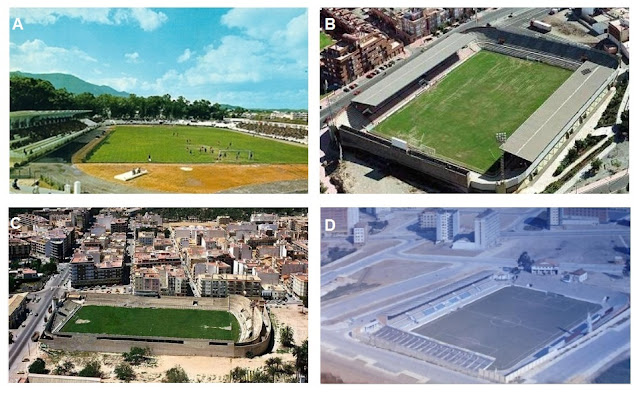 Well, after looking at peoples responses on Twitter, it looks like I set the bar too high! So hear are the answers.


A) Estadio Varela home of Atlético Tetuán. Who? I hear you cry. Well Tetuán is in Morocco, but until the mid 1950's was part of the Spanish Protectorate of Northern Morocco. Atlético played in La Primera for just one season (1951-52) before splitting into two factions following Moroccan independence. Incredibly, the stadium is still in use and is practically unchanged, apart from the name - Saniat R’mel Stadium. You can read about Atlético Tetuán's story here

B) Estadio Municipal Juan Rojas in Almeria. This saw action in La Primera in the early eighties when the current club's forefathers, Agrupación Deportiva Almería reached the top tier for two seasons. The stadium was known back then as the Estadio Antonio Franco Navarro and you can read about it and all things football in Almeria here.

C) This is Elche's Altabix stadium which was a regular venue in La Primera throughout the sixties until its closure in 1976. At the time, it was one of the smallest and basic stadiums in the top flight, but certainly contributed to Elche CF's extended run in the first division. Read all about it here.

I'll post another stadium quiz soon, and fear not, it will be a damn sight easier!