Here is a stadium from the far east of Andalucia, almost to the border with Almeria. Club Deportivo Baza was founded in 1940 as CD Bastetano and over the next 55 years, clocked up 20 seasons in the Tercera. Then in 2005, after winning the league and beating CF Villanovense in the play-offs, CD Baza started a three season spell in the Segunda B.
They didn’t exactly set the world alight in their first season in Segunda B, but they survived, albeit via a relegation play-off victory against Castillo CF from Gran Canaria. The second season saw an improved twelfth place finish, but the relegation play-offs finally caught up with them at the end of the 2007-08 season, when defeat to Villa Santa Brigida (also from Gran Canaria) saw them return to the Tercera. They club made a decent effort to return to the third tier with a fifth place finish in 2008-09, but budget reductions bought an inevitable decline and Baza dropped to the Regional Preferente in May 2011.
The municipally owned Estadio Constantino Navarro is 3 miles south of the centre of Baza. It is surrounded on three sides by olive groves and a fourth by a rather tired looking athletics track. The stadium itself brings a splash of red & white to this rural setting, and is quite quirky. The main changing rooms and directors’ seats are housed in a stand that sits on the half-way line. It looks like a half-opened shoe box, and at 15 meters long, is not much bigger than one. Either side of this stand and on the opposite side of the pitch are bands of red & white seats. The seats opposite the main stand has a media booth on half-way, below which is an exit which divides the seating into two. Two small covers sit either side of the media booth. There is no seating or terracing at either end of the ground. 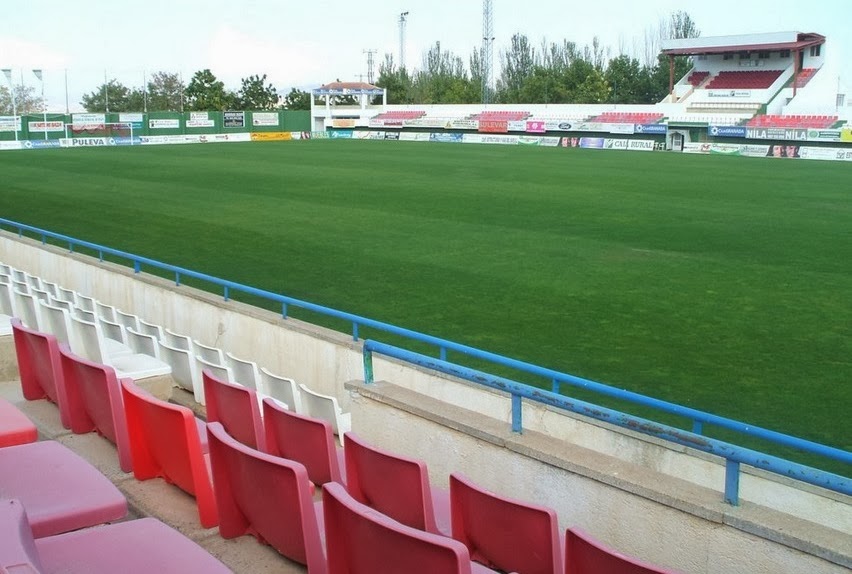 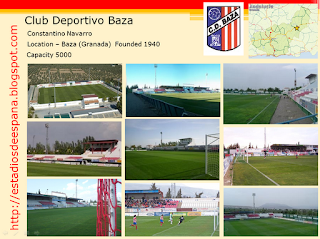