It must have been one of football's earliest unwritten rules. Travel to a steel making or coal mining community and you will find a decent football team. Spain's steel and coal industries were centred in the Basque country and Asturias, and one such community was Langreo. Now in recent years, the local team Unión Popular Langreo has found itself grounded in the Tercera, but there was a time, not too long ago,  when it had its sights set on the big time.
To begin with however, we need to go back to the early twentieth century when two teams from neighbouring parishes in Langreo were formed. First out of the blocks in 1915 was Racing Club Langreano who hailed from the district of Sama. A year later, Círculo Popular de La Felguera was founded and over the next 45 years, these clubs ploughed separate furrows and achieved a certain degree of success. Racing won the Campeonato Amateur de España in 1933-34 and again in 42-43 and established itself in the Tercera from the early 1940's, winning the title on three occasions. Círculo Popular also reached the Tercera in 1940's and then in 1953, it won its second Tercera title and promotion to La Segunda. Under the grandiose name of La Felguera Siderúrgico Círculo Popular, the club managed to complete five seasons in the second tier, with a best finish of seventh coming in 1954-55. Following Círculo Popular return to the Tercera, they and Racing remained strong contenders for the title, but in July 1961, the clubs decided to pool their resources and form Unión Popular Langreo.
The new club used Círculo Popular's La Barraca stadium, which had opened in the late 1920's and been redeveloped when they reached the Tercera in 1943. It had a capacity of 5,000, with a covered stand on the west side that included 1,000 seats. The municipality purchased the stadium in 1961, renaming it the Estadio Ganzábal after the president of Círculo Popular, who oversaw the club's ascent to the second division. The combined strength of the playing staff made short work of Group II of the Tercera in 1961-62, scoring 108 goals in the process. The play-offs proved more difficult, with UP Langreo needing three matches to see off CE Europa before beating Béjar Industrial 6-3 on aggregate to secure promotion. Back then, La Segunda consisted of two regionalised groups and UP Langreo resided in the northern section... the lower reaches of the northern section. In its first five seasons in the second tier, the club had to play-off for survival on three occasions, only avoiding the play-offs by the narrowest of margins on the other two instances. Ironically, the club's best ever finish of tenth in 1967-68 did not count for anything, as the division was reorganised and UP Langreo fell back to the Tercera.
The Estadio Ganzábal was developed by the municipality during the sixties when an 80 metre seated stand was added to the east side. The old west cover was replaced with a new concrete cover in the mid 1970's, which was only 50 metres in length, but did hang over a new seated area. UP Langreo did return to a nation-wide second division in 1970, but this excursion lasted just two seasons and the club has yet to scale such heights again. It did make the newly formed Segunda B in 1977 and played at that level in 14 of the next 22 seasons. They reached the play-offs for La Segunda on just the one occasion in 1993-94. After a promising start, UP Langreo topped the group with two matches to play, but back-to-back defeats to CF Extremadura ended the dream of a return to the second tier. Much of the past decade has been spent in the Tercera, except for the 2002-03 season when the club finished 16th in Segunda B, but lost a relegation play-off to Calahorra. Despite qualifying for the play-offs in five of the past seven seasons, UP Langreo have failed to navigate a way out of the Tercera.
The town of Langreo has had to reinvent itself in the past decade, after the closure of the mines and foundries in the late twentieth century left the town in the doldrums. Part of its urban regeneration saw the area around the ageing Estadio Ganzábal turned into a new sports centre in 2005. A year later and the stadium itself was completely rebuilt, and what a mighty fine job the municipality has done. The centre piece is a full length, single tiered stand on the eastern side of the stadium. Whilst broad bands of red & blue seats add colour to the structure, it is the curved cantilevered roof that catches the eye. Suspended from above by a giant steel arch, it is a modern take on a classic design found 180 miles along the coast in Bilbao. The arch is tethered at each end, and from these anchor points, sprout two floodlight pylons that lean dramatically towards the pitch. Opposite the main stand is the altogether more conventional west stand, which features a narrow cantilevered cover above red & blue seats that spell out the club's name. The first official match at the reconfigured stadium was played on 20 september 2006, when Spain & Turkey in an U-19 international. Asturian Juan Mata had the honour of scoring the first goal. The project was completed in 2008, with the installation of an artificial surface.

At a relatively measly cost of 3.25 million euros, the Estadio Ganzábal has substance as well as style, being used extensively by the community. This includes an annual summer school that bears the name of a former youth team player and Langreo's most famous citizen, one David Villa. 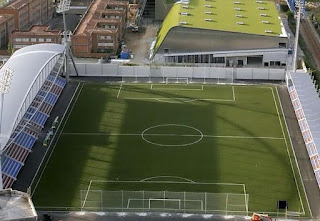 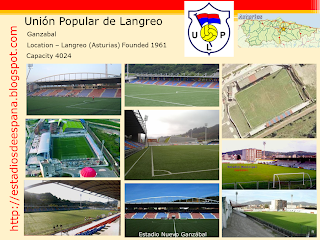