Gernika will forever be associated with the terrible atrocities of one day in April 1937 and Picasso's striking depiction of the horror of that Luftwaffe bombing raid. I must confess that I knew little else about the town that lies between Bilbao & San Sebastian, so at least this site gives me an opportunity to shine a light on Sociedad Deportiva Gernika Club, the town's senior club since 1922.
Gernika Club first made the lower reaches of the Vizcayan regional leagues in 1929, but the lack of a permanent pitch saw the club drop out of the league in 1933. After the Civil War, the club moved to the Campo de Zubikoa and won promotion from the lower reaches of the regional league in 1947. On 21 November 1954, the club moved to the south of the town and the Campo de Santa Lucia and it was here that they won the Copa Vizcaya in 1958 and promotion to the Regional Preferente in 1971. Three years later, Gernika Club debuted in the Tercera for the first time and spent the next twenty seasons usually becalmed in mid-table. That changed in 1993-94 when the club finished in third place in the league and then won promotion to Segunda B after topping a group that featured SD Huesca, Real Racing B & Chantrea.
Their first season in Segunda B ended in relegation, but they returned a year later after another third place finish and finishing top of a play-off group ahead of Real Racing B, Calahorra and  Barbastro. Over the next seven seasons, Gernika Club played their mostly unspectacular football in the third tier, achieving a best finish of ninth in 1996-97. The club was relegated to the Tercera at the end of the 2002-03 season, and two seasons later the club called it a day at the Campo de Santa Lucia. During the summer of 2005, Gernika Club moved to the municipally owned Urbieta sports complex on the northern fringes of the town, whilst Santa Lucia hosted rugby and for a few years, Metalfest, which is pretty self explanatory. The site was redeveloped into housing in 2010.
On opening, the football stadium consisted of just the one stand on the west side of the ground and an artificial playing surface. This has a raised seating deck that sits above changing facilities and offices. This main body of the stand also contains changing facilities for the town's senior rugby club, who play on an adjacent field to the west. 1500 multicoloured seats sit beneath a perspex cantilevered roof, the profile of which resembles the wing of an old bi-plane as it undulates along the west side. The roof is held in place by natural oak beams, which when combined with the clear panels, ensure that the whole structure is bright, light and airy.
To the south of the rugby and football pitches is another artificial football pitch and to the north  is an indoor complex that hosts amongst other things, the ridiculously fast racquet game of Pelota. In 2011, work commenced on 60 metre long grada on the east side of the ground. This sits between the floodlights and will house 1000 seats when complete. Gernika Club has remained in the higher reaches of Group IV of the Tercera since relegation in 2003 and has appeared in the end of season play-offs on three occasions in recent years, the most recent being in 2008, when they lost to Atletico Baleares. The club is well placed this season and if they manage to navigate the play-offs, Urbieta will serve them well in Segunda B. 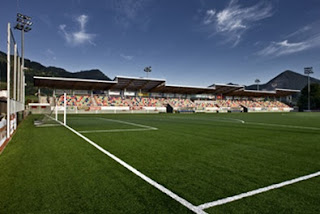 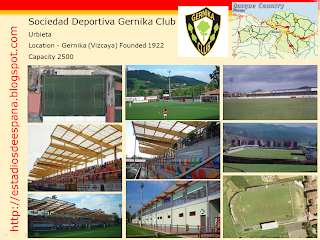