Blink and you might miss the small market town of Sariñena. You'll find it in the north of the region of Aragon, around 50 miles east of Zaragoza and 30 miles south of Huesca. The local club is Club Deportivo Sariñena and they play at the Campo de El Carmen, a single stand stadium to the south of the town.
Founded in 1945, CD Sariñena spent it's first 33 years in the regional leagues, before reaching the Tercera for the first time in 1977. Their debut season ended in relegation and it took a further nine years for the club to return to the fourth tier. Upon their return in 1986, CD Sariñena put together a series of decent finishes, culminating in a runners-up position in the Tercera in 1988-89. The club has remained in the Tercera ever since, hitting a level of mid-table consistency that has never seen them troubled by relegation, but equally rarely push for promotion. They did however manage a fourth place finish in  2004-05 which saw them reach the play-offs for the first time. However 0-3 aggregate defeat to Real Racing Santander B put an end to their promotion hopes.

It took another seven years for the club to return to the play-offs and the 2011-12 season was Sariñena's best yet, with the club topping the table for much of the season before settling for runners-up position behind SD Ejea. In the play-offs, Sariñena was initially paired with UD Alzira and a 0-1 away win in the first tie, coupled with a home draw saw them progress. Their fortune ran out in the next round, where they lost 1-4 on aggregate to CD Izarra. A year later and CD Sariñena had secured their first Tercera title, edging out Andorra CF on goal difference. Haro Deportivo was dispatched 0-2 on aggregate in the play-offs, and as a result, this part of Aragon will witnessed Segunda B football during the 2013-14 season. Not that Sariñena's performances in the third tier bought a lot of cheer.  4 wins, 17 goals and a measly total of 22 points saw the club relegated back to the Tercera by the end of March.
El Carmen has been home since 1950, when the club left its original home of the Campo de los Jinjoleros. Built in the grounds of a former convent, it  is basic, but still has its charms. The main tribuna is 50 metres in length and stands on the west side of the ground. It straddles the half way line and has a concrete seating deck which is raised 10 feet above pitch level. This deck has five rows of concrete benches that are covered by a narrow cantilevered roof. The roof is covered in blue cladding, the stand's only concession to the club colours. Under this deck are the changing facilities and the ground-staffs storage rooms. There is a narrow paddock in front of the stand and hard standing on the remaining three sides. There is a small cover and bar in the north west corner, whilst at the southern end is a fantastic mural paying tribute to Che Guevara and PCPE, the Communist Party of the People of Spain. The main stand and the playing surface benefited from a 100,000 euro refurbishment in the summer of 2010. Despite the investment, El Carmen still looks very rural, which isn't really a problem. You see the town and surrounding villages have a population of 4,000, precisely the capacity of the stadium. 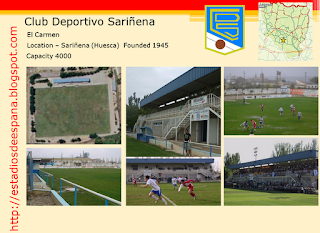 Labels: Aragon, Tercera or Below