Tucked away in the hilly, green suburb of Lavadores is the Campo Municipal de Barreiro, home to Real Club Celta de Vigo B. Opened in 1965, the ground also plays host to Gran Peña Fútbol Club, one of the city's older clubs and one that has in the past, been affiliated to Celta Vigo.
Celta Vigo's relationship with affiliated and reserve teams is a complicated affair, full of official and unofficial allied clubs. The B team's official record links it to Sport Club Turista, one of the first affiliated clubs who was formed in 1927. SC Turista plied much of its trade as in independent team in the Tercera, allowing Celta Vigo first pick of it's promising players. In 1988, Celta Vigo looked to formalise the arrangement and entered into talks with SC Turista & Gran Peña FC, with a view to merging the clubs into an official reserve team. Gran Peña FC pulled out of the talks, a move that would see them exiled from Barreiro for two seasons, but SC Turista went ahead with the union and formed Club Celta Turista. The club won promotion to Segunda B in 1992 and whilst it returned to the Tercera for much of the 1990's, it gained promotion back to Segunda B in 2001, where it has remained. It has only reached the play-offs for promotion to La Segunda on the one occasion, 2003-04, but finished third in a group won by UE Lleida.
The Campo Municipal de Barriero is another single stand stadium. The current stand was built in 1988 when the municipality redeveloped the site. It sits on the southern side of the ground and features a single tier of concrete bench seating that is 80 metres in length. Above the central players entrance is a few sky blue seats for the media and club officials. Its distinguishing feature is a barrel-vaulted propped cantilevered roof. This high steel & perspex cover looks impressive, but offers limited cover to those below. Certainly open to the elements is a bust of Pepe Castro Gonzalez that stands pitch side in front of the players entrance. Celta B has also played matches at the clubs training ground, the Instalaciones Deportivas de A Madroa, where a single raised stand with a cantilevered cover overlooks an artificial surface. 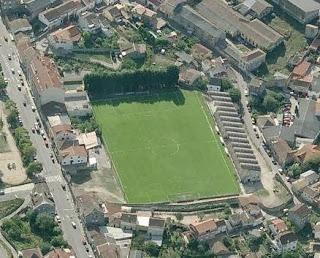 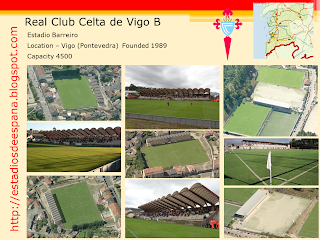