Unlike many of its coastal cousins, the inland town of Ourense was slow to embrace the God's own game. Football did not really establish itself in the town until the second decade of the 20th Century. Even then, Ourense's clubs were mostly confined to the lower reaches of the regional leagues until the emergence of Unión Deportiva Orensana in 1942. After reaching the Tercera in 1943, the club clocked up a series of impressive finishes, including league titles in 1945-46 & 1948-49.
Home during UD Ourensana's stay in the Tercera was the Campo del Cardenal Cisneros, however following promotion to La Segunda in 1949, the club moved to a new ground just south of the Rio Miño in the district of O Couto. Built with funds from the state run Educación y Descanso, the new stadium was inaugurated on 14 November 1949. On opening, home fans were treated to a 5-0 beating of Racing Ferrol and although their new abode had the official name of the Estadio de José Antonio, supporters referred to it as O Couto from the outset. UD Ourensana hung around in La Segunda for three seasons, but the cost of travelling across the breadth of Spain took its toll, and following relegation at the end of the 1951-52 season, the club folded.

After the demise of Unión Deportiva Orensana, brothers Jesús & José Luís Díaz Varela formed Club Deportivo Ourense in September of 1952. They signed a number of former UD Ouresana players and moved into O Couto. The club made rapid progress through the regional leagues and reached La Segunda in 1959. Here they stayed for 6 seasons, finishing third in their debut year and again in 1961-62. Following their relegation to the Tercera in 1965, there followed a period of dominance at regional league level, but failure to progress in the play-offs. This included a remarkable feat of winning all 30 league fixtures during the 1967-68 season, before the play-offs tripped them up again. You can read about that incredible campaign here. CD Ourense eventually returned to La Segunda in 1969, and have managed three other visits, but have failed to scale the heights of that initial visit. Following their last relegation from La Segunda in 1999, CD Ourense spent the thick end of a decade in Segunda B, before dropping to the Tercera in 2008.
O Couto is a curious mix of stands and terraces that have been converted to seating. The Grade Preferencia is the largest and most modern of the stands, having been built in the early nineties in advance of a brief trip to the second division. This holds 2,232 spectators in bands of red & blue seats that are raised some ten feet above pitch level. Opposite is the older Grada de Tribuna. This dates from the late sixties and was originally a terrace with a series of barrel-vaulted cantilevered sections making up the roof. This was seated when the club had a three year spell in La Segunda in the late 1990's and has 1811 red & blue seats. At the southern end of the ground is the Grada de Fondo. This was originally an open terrace that curved around the oval lay-out of the stadium. This was also covered and seated in the late 1990's.
I've always liked the hotch-potch mix of stands and the slightly unkempt feel about O Couto. You can tell that it once looked rather smart, but it is now fraying a bit at the edges. The northern end of the stadium undoubtedly adds to this feeling, as it has quite possibly the most ramshackle collection of buildings I have ever seen at a football ground. Amongst  a collection of over-sized advertising hoardings are three tiers of club offices and changing rooms, all of which look like a graveyard for portakabins. The stadium saw its first floodlit match on 28 September 1972, when Real Zaragoza visited for a friendly, although the current set date from the early 1990's. O Couto has hosted the Spanish National U21 side, when they played their Dutch counterparts in November of 1981.

As for CD Ourense, well they appeared to have turned the corner in 2011-12 when they won their eighth Tercera title. Placed in the Campeones Group for the play-offs, Ourense made short work of the Basque side CD Laudio, winning 4-1 on aggregate. Third tier football finally returned to O Couto in September 2012, and a 12th place finish in 12-13 was respectable. The 2013-14 season was played against a backdrop of a financial crisis. With debts mounting and a lack pf governance in the boardroom, CD Ourense was demoted and folded in June 2014. 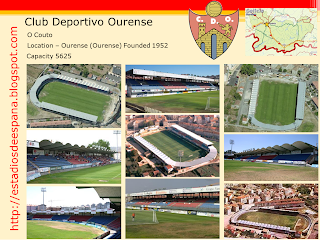