For every Real Madrid or FC Barcelona there are one hundred clubs like Ontinyent Club de Fútbol. They are consigned to spend the majority of their time in the semi-professional third and fourth tiers, holding on to the hope that they might just get a year or two in La Segunda. That, in essence, is an outline of Ontinyent CF's history. Now let's add some colour.
Ontinyent is a small town in the mountainous Serra Grossa region of the Comunidad Valenciana. Organised football had been played in the town since the early 1920's and the first senior team, Club Deportivo Onteniente was formed in 1923. Over the next 20 years, the club played their matches at Camp de La Farinera, a privately owned field built on the site of an old flour mill on the banks of the Rio Clariano. Mergers with smaller clubs in the town saw the renamed Onteniente Club de Fútbol reach the Tercera, but with increasing debts, the club folded in 1944. It took three years for a new senior team to emerge, when Peña Deportiva Ideal was formed in July 1947. The Camp de La Farinera served as a home, but its basic facilities led to a campaign to build a new, multi-sports facility. The municipality had originally looked at refurbishing La Farinera, but was unable to reach an agreement with the land owners. So in June 1950, following a donation of land and money from local businessmen, the municipality stumped up 320,000 pesetas to build a new stadium to the east of the town, on the road to neighbouring Albaida.
The new stadium was named El Clariano and was opened by General José Moscardó  on 10 January 1951 with a friendly match against Valencia CF. It featured a half-length propped  roofed grandstand on the west side and a narrow terrace opposite. Two ornate sets of gates were built at the north and east ends whilst a bell tower stood in the north east corner. Pena Deportiva Ideal changed their name to Onteniente Peña Ideal and finally reached the Tercera in 1955. Results gradually improved with the club finishing runners-up to Olimpic de Xativa in 1960-61, but lost out to Burgos CF in the play-offs. The Tercera championship was secured two years later and after play-off victories over SD Eibar and CD Hispana, so was promotion to La Segunda.
Before they could debut in the southern section of La Segunda, El Clariano required some work, so the municipality constructed an open terrace at the southern end of the ground. That first 1963-64 season saw the club finish a creditable tenth, losing just one match at El Clariano. The following 65-66 season proved much more difficult and the club eventually finished 15th and was relegated. Three years later and Onteniente was back in a nationwide La Segunda and this time stayed in La Segunda for three seasons, finishing ninth in 1969-70. Relegation followed however a season later and whilst the west side of the stadium was redeveloped in the 1973 with the building of a full length tribuna, the club has never managed to return to the second tier.
The club has spent 28 of the past 40 seasons in the Tercera. It changed its name in 1995 to the Valenciana version, Ontinyent Club de Fútbol and that decade also saw floodlights erected for the first time. El Clariano was refurbished in 2000 with the main stand reseated, whilst the southern terrace was removed. The club had three spells in Segunda 2b during the 1970's & 1990's and returned to this level for the 2007-08 season. The 2009-10 season saw the club have its most successful season in nearly forty years when finishing third in Group III of Segunda 2b. In the play-offs, Ontinyent eliminated CD Guadalajara and SD Eibar before losing in the final minute of their away tie with Alcorcon.
El Clariano is a delightful enclosure, that is simple and pristine. The main feature, the west Tribuna, is bedecked with seven rows of pale blue seats that sit six feet above pitch level. The rear two rows are arranged into palcos or pens of eight free standing seats. Despite its smart appearance, it is an old design, with the tell-tell signs being just the one central access point for spectators and the low dark changing facilities beneath the stand.
The northern end still has the bell tower and triple arched gateway, whilst the east terrace is still divided into two sections, at the centre of which stands the double arched gateway. One wonders how much of the stadium would remain if Ontinyent reached La Segunda? In an era of idenikit stadiums, El Clariano is an uncomplicated joy. 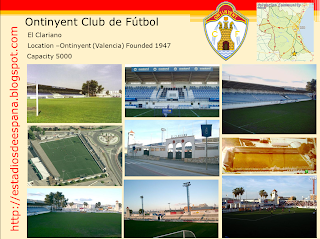