I visited Gandia back in 2007 and was up to my usual touristy thing - Visit to the town's excellent midweek market, pick up some food for lunch, then head to the beach... via the football stadium. Even by my contrived standards, getting 'lost' next to the Estadio Guillermo Olagüe was quite some feat and one that I still feel quite smug about. My wife & kids just think I'm sad.
The Estadio Guillermo Olagüe has been home to Club de Fútbol Gandía since 1967 and is tucked away to the east of the old town on a bend in the Rio Serpis. Before the club decamped here, it played its matches at the Camp de Mondúver from 1952-67 and prior to that at the Campo del Bulevar, which was the club's original home from formation in 1947. Football had been played in Gandia from the 1920's but the only team of note to emerge, Club Deportivo Gandía, was cut off in its prime by the Civil War.
Club de Fútbol Gandía spent the vast majority of its first forty years stuck in the Tercera. It managed to win the title in 1961-62 and reached the promotion play-offs on five occasions, but failed to progress. Then in 1985-86 tit finished runners-up in the Tercera and defeated UP Langreo & CD Maspalomas in the play-offs to earn promotion to Segunda B. They stayed in the third tier for six seasons, finishing as high as third in 1989-90, before dropping back to the Tercera at the end of the 91-92 season. Four years later and CF Gandía was back in Segunda B after topping a play-off group that featured CE Europa, CD Sóller and Águilas CF. This time the club managed five seasons in the third tier, the highlight of which was undoubtedly their title winning season of 1999-00. A tough draw in the play-offs put an end to any hopes of reaching La Segunda and CF Gandía finished bottom of their group behind Barakaldo CF, AD Ceuta, and Racing Club de Ferrol. A reduction in the budget and loss of players put an end to the club's stay in Segunda B and relegation followed at the end of the 00-01 season.
After spending much of the first decade of this century in the Tercera, CF Gandía won it's third Tercera title in 2009-10 and earned promotion back to Segunda B thanks to a 3-2 aggregated win over La Roda. Trailing on the away goals rule, CF Gandía was awarded a last minute penalty, which  Marcos Estruch converted with a certain aplomb. Strong form at home ensured that the club achieved a 14th place finish in 2010-11, but their stay in the third tier ended at the end of the 2011-12 season. Worse was to follow in 2013-14. A poor season saw the club finish in a lowly 15th place, but unpaid debts led to demotion to the Regional Preferente.
Opened on 31 December 1967, the Estadio Guillermo Olagüe has aged remarkably well. Admittedly, there isn't an awful lot to go wrong, however what is on display looks rather smart. The main west stand has a raised seating tier of nine rows of blue and white seats which spell out the clubs name. It used to have a line of palcos (private booths) with a central press box that stretched the entire length of the stand, but all that remains now is the press accommodation. All of this sits under a pre-cast concrete roof, whose white vaults splay out like a fan. Similar in design to those found at Celta Vigo and CD Tudelano, this example has certainly weathered better than its contemporaries. Opposite sits an open bank of five rows of blue and white seats, whilst five steps of terrace can be found behind either goal. An artificial pitch was installed in May 2005 and the main stand underwent a major refit in the spring of 2011, which set the municipality back the sum of €1.2m. With a capacity of just 4,800, I think I did rather well to find this little treasure on the way to the beach and if you ever find yourself in Gandia, be sure to lose your way as well. 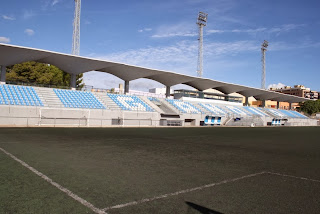 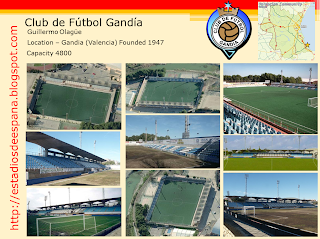