Where there is muck there is brass. Throw in rapid industrial expansion and there’s a good chance that a decent football team will emerge. The Basque town of Barakaldo had all of these ingredients at the turn of the twentieth century. Add to the mix one of Spain’s largest iron works and a dynamite factory, and the town was, ahem, primed for action. No doubt spurred-on by the success of Bilbao’s Athletic Club, many small teams sprang up in the first decade of the century. Two such clubs were Baracaldo Sports Society and Carmen Foot-Ball Club, who pooled resources in 1917 to form Baracaldo Foot-Ball Club.

A sandy plot of waste land sandwiched between the railway and El Cuadro Maderos was the club’s first home, however, this land was soon acquired by the ever expanding iron industry. For the next few seasons the club played on fields next to the Rio Galindo, but this was far from ideal as the area was prone to flooding at high tide. So in 1922, Baracaldo moved a couple of hundred yards inland to their first purpose built enclosure. Lasesarre opened on 17th September with a match against local big-wigs Athletic Club, who spoilt the party with a 1-3 win. Baracaldo had made steady progress in the Vizcayan Regional Championship, reaching the top division for the 1922-23 season. but with the the likes of Athletic & Arenas as regular opponents, the league title was always just out of reach. Their form and reputation was however good enough to join the fledgling Segunda B championship when the national league started in February 1929, and the Tercera when the format was re-jigged a year later. Promotion to La Segunda followed in 1934, but Baracaldo's upward momentum was stopped in its tracks by the outbreak of Civil War.

Bilbao was captured by the Nationalists in June 1937 with minimal damage to the city and its industrial infrastructure. The same could not be said of its population. Many of its citizens had been evacuated and trivial matters such as football had ceased. The Nationalists had formed an uneasy alliance with the Carlist movement, and it was a club with strong Carlist links that was the first to emerge from the turmoil. Oriamendi Sport Club had been founded in 1922, but had never played higher than the regional second division. Suddenly, they were the senior team in Barakaldo, competing in hastily arranged tournaments in areas that had fallen to Franco’s forces. At the end of 1938, the club enlisted some of Baracaldo FC’s former players and a formal union was established with the historic club in early 1939. The club competed in a seriously foreshortened version of the cup, renamed the Copa del Generalisimo, reaching the semi-finals before losing out to Franco’s home town club Racing de Ferrol. Once the war had ended, the Spanish Federation confirmed that the league status at the end of the 35-36 season would be respected and so second division football returned to Barakaldo with the newly monikered CD Baracaldo-Oriamendi.

The following 20 seasons saw Baracaldo become practically a permanent fixture in La Segunda. This was helped in no small part by the funding it received from Altos Hornos de Vizcaya, the iron and steel manufacturer. This partnership saw the club change its name in 1943 to Club Deportivo Baracaldo Altos Hornos. It also saw the club drop the Carlist blue kit and return to its original colours of black & gold. Improving results and finances saw the club develop Lasesarre and a three-quarter length grandstand was  opened on 28 November 1948, celebrated with a 3-0 victory over Girona. Whilst confined to mid-table for the majority of this period, there were exceptions, with season-long visitis to the Tercera in 45-46 & 57-58, whilst a high of second place was achieved in 1953-54. This saw Baracaldo enter the end of season play-offs, but the club finished 3 points adrift of promoted CD Málaga and Hercules CF. The 1960's witnessed a slow decline, with more frequent and longer stays in the Tercera, punctuated by a two season visit to the second tier from 1964-66. Altos Hornos withdrew their patronage in 1971 and the club reverted to Baracaldo Football Club. If they were concerned that the withdrawal of the steel money would have a detrimental impact on the pitch, they needn't have worried, as the club won promotion and spent six of the next nine seasons in La Segunda.

After many sterling performances in the second division, Baracaldo’s last appearance in La Segunda turned out to be a bit of a damp squib, finishing 19th and four points from safety. The club’s fortunes mirrored that of the town, as they both slipped into decline. A three season spell in Segunda B ended in 1984 with relegation to the Tercera. Here they stayed for the next four years before earning promotion with the Tercera championship in 1988. Baracaldo spent the whole of the 1990’s in Segunda B, racking-up some impressive top-four finishes. However, the promotion play-offs proved to be their Achilles heel, losing out on a return to the second tier on six occasions. In 1986, the club took the decision to adopt the Basque spelling of it’s name, Barakaldo CF. With the landscape in and around the Greater Bilbao area undergoing massive regeneration, it was only a matter of time before time would be called on the ageing Lasesarre.
Lasesarre had changed little over the past 52 years. After the grandstand had opened in 1948, the east terrace was covered with a low, dark, propped roof in the mid 1950’s. The obligatory perimeter fencing was added in the early eighties, but this only added to its austere, antiquated and rather grim appearance. However, this didn’t matter to the supporters, who loved the tight terraces, the low covers and the fact that Lasesarre had played host to the club’s golden years, or should that be golden & black years? The end came on 15 October 2000 with a 1-0 victory over Osasuna B. However, instead of moving into a smart new stadium, Barakaldo had to settle for a makeshift arrangement. The club travelled half a mile to the south west and the district of San Vicente and the municipal athletics stadium. Never ideal in layout for players or fans, the Campo de San Vicente nevertheless saw Barakaldo produce some decent football, winning a Segunda B title in 2001-02 and runners-up a year later. However, the play-offs proved to be a step too far once again. Barakaldo played their last match at the Campo de San Vicente on 28 September 2003, when Pontevedra were held to a 1-1 draw.
On 30 September 2003, Barakaldo played its first match at the new Campo de Lasesarre, a €5.1m stadium that sits just a hundred metres north of the site of the old Lasesarre. Loved by architects and tourists, the new stadium is almost universally disliked by Barakaldo's loyal supporters. Sure, the old Lasesarre was cramped, crumbling and hopelessly antiquated, but it witnessed the very best of Barakaldo and above all, it felt like a home. 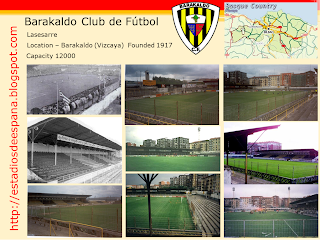 Labels: Euskadi, Gone but not Forgotten