Sporting Mahonés is no more. On 24 January 2012, the club announced that it was withdrawing from Group III of Segunda B due to the fact that practically all the professional squad had left the club. With debts of over 230,000 euros and a transfer embargo in place, the club could not raise a team for the remainder of the season. It had struggled to field a side in what turned out to be it's final match, but essentially a youth team represented the club in last Sunday's 0-6 defeat at Sant Andreu. Sporting go the way of their namesakes from Villanueva del Fresno and  Poli Ejido and rumours are abound that several others are close to folding.
With a capacity of 3,000, their Estadi de Bintaufa provided adequate space for Sporting's meagre crowds. The club did have plans to start work on redeveloping this rather basic ground. Not that the new plans were particularly ambitious, as they focused more on the development of a training academy, rather than spectator capacity. Due to start work in the close season, the new complex would have featured two full size pitches, a smaller training pitch, a half length stand on the west side and club offices and changing rooms to the north. The club may still have youth teams registered with the Balearic Federation, but with two other stadiums in Mahón, one expects that these will now become the focus for football in the city.

How about a bit of background? The club was an amalgam of CD Menorca and UD Mahón who joined forces in 1974, after both sides were relegated to the regional leagues. Between formation and 1978, Sporting played at two locations close to the centre of town, starting out at the former home of CD Menorca, the Campo Municipal de San Carlos. The following season saw the club play at the Estadio Mahonés, which had been the home of UD Mahón. Both stadiums are still in working order, with San Carlos practically unchanged since Sporting last played there. Sporting then alternated between the two grounds before moving two kilometres south of the town centre to the current location in 1978.
Sporting's most successful period came at the end of the 1980's when it spent six seasons in Segunda 2b, with a best finish of fifth in 1988-89. They dropped to the Balearic Tercera in 1993 and remained there until June 2009, when they dispensed of CD Mutilvera, Burgos CF and Tenerife B in the play-offs to clinch promotion to Segunda 2b. Sporting spent the past two seasons battling at the wrong end of the table and this season, after a fair start, form and players deserted them as they edged towards extinction. Bintaufa is an old relic of a stadium set in scrub land close to the town's Aeronautic Club and its small airstrip. It features a simple covered stand that is 65 metres in length has five rows of bench seating. Opposite is a boxy media booth and a narrow terrace, whilst rather uneven hard standing makes up the rest of the ground.
Whilst the economic downturn has effected clubs the length and breadth of Spain, the Balearic Islands have been particularly hard-hit. Atletico Ciutadella, CF Soller and SD Eivissa have all folded in recent seasons, whilst Real Mallorca's financial woes have been well documented. However, as sure as day follows night, the debts will be left unsettled and from all this debris and detritus,  a new club will emerge. T'was ever thus. 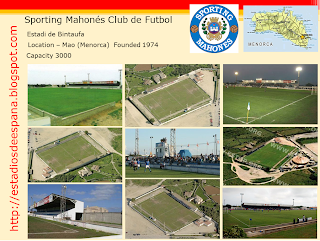