The town of Alzira lies 25 miles south of Valencia and despite UD Alzira being the sworn enemy of the wondrous Olimpic de Xátiva, I really like the town and I have a soft spot the club. UD Alzira is the third senior team to come from the town, the first being Alcira Foot-ball Club. After a bright start to life in 1922, Alcira FC folded four years later when they had to sell their main asset, the Campo de L'Alquenència.
Five years later a new club, Agrupación Deportiva Alcira, brought football back to the Campo de L'Alquenència. By 1936 the club had earned promotion to Category A of the Valenciana league, but the Civil War put an end to its participation in the competition. After the war, the leagues were restructured and in theory, Alcira should have featured in the Tercera, but behind the scenes shenanigans by the directors of Burjasot FC saw their club and not Alcira compete at the higher level. The club struggled on for a few more years, but folded in the summer of 1942. It took a further four years and the merger of several amateur clubs to form the current club Unión Deportiva Alcira. Home for the new club was the Estadio Frente de Juventudes and over the next six seasons, it progressed through the regional leagues, before wining promotion to the Tercera in 1952. There followed a decade of respectable if unspectacular form in the third tier, before the club was bought by local farmer turned ice-cream magnet Luis Suñer in 1963, and given to his 21 year-old son Luis Suñer Picó .
The move cleared UD Alcira's debts and allowed the club to strengthen its squad. The impact was immediate and the club rose to the top of the Tercera. Tragically,  Luis Suñer Picó  died in a car accident in 15 January 1964, but the club continued to impress, eventually finishing second in the league and qualifying for the end of season play-offs. Here they were paired with CF Extremadura, losing the first leg in Almendralejo by 3 goals to one. A week later, CF Extremadura completed the job with a 0-2 win at the Estadio Frente de Juventudes. Following the trauma of the 63-64 season, the club went into a steep decline, dropping to the Regional Preferente in 1966. Alcira made two season long returns to the Tercera in the late 1960's, and then in 1972, Luis Suñer decided to build a new stadium to the north of the town. He wanted it to be the best stadium in the region outside of Valencia and dedicated it to the memory of his son. Work began in late 1972 and was nearing completion when Alcira started the 1973-74 season back in the Tercera. The official opening of the Estadio Luis Suñer Picó was on 1 November 1973, when Alcira drew 1-1 with Villarreal in the Copa de Generalisimo, although some contemporary reports show the ground being used from 15 September 1973.

Not content with one club, Luis Suñer formed another team, Avidesa Atlético in 1971. They were named after the ice cream division based in Alzira, and the two clubs met in the promotion play-offs at the end of the 1976-77 season. To avoid a repeat of this awkward situation, Suñer merged the two teams and UD Alcira continued in the Tercera. Then in 1982 the club witnessed two of the darkest events in its history. On 16 May UD Alcira faced relegation from the Tercera and was losing at home to UD Alginet, when the referee was attacked by home supporters, leaving him seriously injured. The club was relegated to the Preferente and the Valenciana Federation closed the stadium for a year. The club had relocated to grounds at the local college, when on the evening of 20 October 1982, exceptionally heavy rains caused the Tous dam to collapse inundating the town with up to 4 metres of water. The Valenciana Federation lifted the sanctions and the club returned to the Estadio Luis Suñer Picó.
Although still president of the club, Suñer took a back seat due to health problems, which had been exacerbated after ETA had kidnapped him in 1981. Thankfully, after a traumatic 18 months, the club started to show some potential which brought two Tercera titles in three seasons and culminated in promotion to Segunda B in 1986. During the summer of '86 the club changed its name to Unión Deportiva Alzira and prepared for life in the third tier. A tenth place finish in their first season was followed by the league title in 1987-88 and automatic promotion to La Segunda. With a new president in the shape of Pepe Furió, Alzira invested heavily in new players, but the gamble did not pay off and the club finished 18th and 8 points from safety. With large expenses, but no sizeable increase in crowds, Alzira's form and finances spiralled into decline and by 1994, the club was playing its football back in the Regional Preferente. The past couple of decades has seen Alzira regularly switch back and forth between the Tercera and the Regional Preferente. Interspersed have been the occasional visit back to Segunda B, but all have been brief stopovers and could not be classed as anything other than disappointing.
Now approaching its fortieth anniversary, the Estadio Luis Suñer Picó is typical of so many stadiums that sprung up in the east and south of Spain in the 1960's & 70's. The focus of this and many other stadiums of this era is a raised, covered stand, whilst the rest of the capacity is made up of simple, shallow terracing. That's not to say that Alzira's contribution to the trend is not without its merits, for whilst the rest of the stadium is looking a little dog-eared, the main stand has scrubbed up rather well. Slightly cranked, it houses 5300 in a single tier that has been filled with bands of red & blue seats. This tier is divided into three sections, with a wide concourse splitting the bands of seats, whilst a line of palcos or individual pens can be found at the rear of the stand. All of this sits under a deep and wonky propped cantilevered roof. This cover has seen the recent addition of solar panels across its entirety, which is a novel way of generating  electricity and much need money. Whether this provides the necessary spark to see an improvement in Alzira's fortunes remains to be seen. 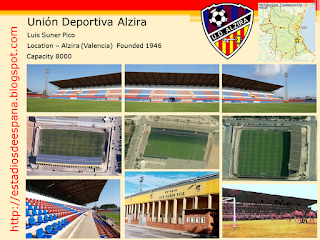