Club Deportivo Puertollano has returned home. The club's impressive new stadium, which opened in November 2010, is built on the site of their former Estadio del Cerru, which occupied the site from 1948 to 1988. Despite the town's size and reputation for mining, Puertollano did not experience the footballing boom of the early 20th century, that so many other industrialised areas witnessed. In fact, the current club was the first from the town to join the Spanish Federation, and that was not until 1948.
The club started out as a works team of Calvo Sotelo, the nationalised mining & petrochemical company that had a major plant in Puertollano. By the early 1950's Club de Fútbol Calvo Sotelo was making noises in the Tercera division with a series of top five finishes. The club won it's first Tercera title in 1958-59 and four more followed in the next five seasons. The club's luck in the end of season play-offs finally turned in 1963-64 when they disposed of Club Atlético Malagueño and CD Menorca to earn a place in La Segunda. Their good form continued, culminating in a second place finish in 1967-68. This earned a short trip to a Cordoba side that had struggled in La Primera. However, Cordoba might as well have been a million miles away, as CF Calvo Sotelo blew it again in the play-offs, losing 1-6 on aggregate. Three further seasons in La Segunda followed, before the club was relegated back to the Tercera at the end of the 1970-71 season. CF Calvo Sotelo did regain a place in the second division in 1975, but the magic had deserted them and after three seasons of struggling, they dropped into the recently formed Segunda B.
The club had one further season in the second tier in 1984-85, but following the privatisation of Calvo Sotelo in 1988, the club changed it's name to Puertollano Industrial Club de Fútbol and the sponsorship money ended. The club also moved to the Estadio Municipal Francisco Sánchez Menor in 1988, a multi-purpose sports stadium to the north west of the town. The lack of funds led to a decline in the club's fortunes, even seeing a drop into the regional leagues in 1990. In 1999, the club joined forces with three junior clubs in the town to form Unión Deportiva Puertollano, and eventually escaped the Tercera in 2006. They continued to play at the Estadio Municipal Francisco Sánchez Menor until 2010, when a move to the new stadium also saw the club re-branded as Club Deportivo Puertollano. The final match at Francisco Sánchez Menor took place on 31 October 2010, with the home club defeating CF Caravaca 1-0.
The club's return to its spiritual home saw them draw 2-2 with Sevilla Atletico on 21 November 2010. Built by the municipality at a cost of € 7 million, the new arena has an all seated capacity of 7240, arranged on three open banks of blue and white seating and a large covered main stand to the north side of the stadium. This stand also features 17 private boxes, modern media facilities, changing rooms and an indoor warm-up area for the players. The development is complete with an artificial training pitch behind the southern bank of seating.

Regrettably, a nice new stadium does not guarantee success on the pitch. The 2010-11 season tailed-off alarmingly, with no win in the final seven matches. The same pattern occurred in 2011-12, although the problem was exacerbated by the club's need to save money and shed players during the January transfer window. With some players wages still unpaid at the end of season deadline, Puertollano was demoted to the Tercera. Yet another cracking stadium confined to Spain's lower divisions. 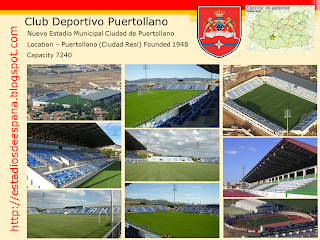