Home to Club Deportivo San Roque de Lepe, the Estadio Ciudad de Lepe is one of the newest stadiums in Spain. It opened its doors on 23 March 2011 with a schools community match and the World Cup Trophy putting in an appearance.
The first official match at the stadium was on 16 April when CD San Roque played Yeclano Deportivo and won by a goal to nil. The budget for the stadium was 4.2 million euros and the design bucks the trend for of many new stadiums in the south of Spain by providing cover for all of its stands, which is useful if you kick-off in the midday sun. The stadium was quite a commitment by the town and with room for expansion, the powers that be clearly have one eye on the future. That may have to wait however, for after three impressive campaigns in Segunda B, San Roque endured a wretched 2012-13 season, ending in relegation to the Tercera.
The Estadio Ciudad de Lepe has a capacity of 3,512 spread across its three covered stands. Unusually, the open end, behind the south goal has no terrace or hard standing, but a simple fence behind which is a training pitch. This area could house temporary seating for the club's bigger matches, but this was conspicuous by its absence when the stadium hosted its biggest match to date, a visit from Sevilla FC for a Copa del Rey tie in December 2011.
CD San Roque was founded in 1956 and played at the Campo Municipal de Deportes de Lepe from its inauguration in July 1957 until the end of the 2010-11 season. This basic ground in the heart of town had a capacity of 2,500 and featured a covered full length stand on the west side of the ground and narrow terrace on the east. 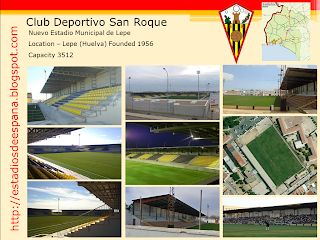