Over the past eight seasons this little club based just 30 miles south of Salamanca, has defied the odds and the experts who have predicted its relegation. There is a degree of justification in these predictions of foreboding as the town of Guijuelo is more famous for the quality of its Jamón Iberico rather than its footballing pedigree. But survival in Segunda B has continued to be achieved, albeit by the skin of their teeth on a couple of occasions.
Formed in 1973, Club Deportivo Guijuelo is the first and only club to represent this small town of 6,000 inhabitants and the Campo Municipal, just to the south of the town, has been home since its formation. CD Guijuelo played in the regional leagues before reaching the Tercera for the first time in the 2002-03 season. Two successful campaigns culminated in a play-off victory over CD Móstoles and promotion to Segunda B in June 2004. Their debut in the third level saw the club play an attractive, attacking style of football, but ultimately finish in seventeenth place and drop back to the Tercera. A year later and play-off victories over UP Langreo and Real Madrid C earned promotion back to Segunda B. Here the club has remained, earning two impressive ninth place finishes in 2007-08 & 08-09. Results then tailed-off and in June 2010 relegation to the Tercera was only avoided with victory over Espanyol B in the relegation play-off.

The Campo Municipal de Deportes is a small enclosure set within the grounds of the town's sports centre. It's principal feature is a series of three covers on the west side of the ground, at the centre of which is the larger and older of the trio. This includes changing facilities and a small media booth. Flanking this older cover are two newer covers that were added in the summer of 2011. The upgrade also saw the installation of a new artificial surface. The remaining three sides are surrounded with hard standing leaving the ground with a capacity of around 1700. The 2011-12 season saw the club produce its best season yet in the third tier, finishing seventh and just 4 points off the play-offs. Highlights of the season included  a 2-1 win over then local big-wigs UD Salamanca, a result that ensured that CD Guijuelo would finish above them in the final standings.
The 2012-13 pre-season was a tumultuous affair with CD Guijuelo offering their resignation to the league. Citing financial difficulties and the failure to appoint a club president, the first team was to be wound up, although the club would continue to compete in junior leagues. This stirred the local community into action and the first team was given a stay of execution, deferring their first fixture in the Segunda B 2012-13 season. They eventually committed themselves to Segunda B, albeit with a drastically reduced playing staff and budget. Even with these constraints, Guijuelo prevailed, finishing the season in 15th position. 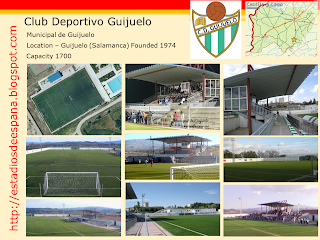