The story of Real Oviedo is one that has more ups and downs that the countryside that surrounds the capital of Asturias. To start with let's look at their fantastic Estadio Carlos Tartiere. No, not the current grey & blue monolith, but its perfectly formed predecessor that sat in the heart of the community.
Real Oviedo was formed on 26 March 1926, following the merger of Stadium Club Ovetense and Deportivo Oviedo. The team's coach in that first season was the legendary Fred Pentland who had been coaxed away from Atlético Madrid. Home was the extremely basic Campo de Teatinos, which had been the home of Deportivo Oviedo. Teatinos had a capacity of 10,000 and was situated around a kilometre north west of the old town centre, close to the current Calle Chile. However, after losing out to Gijón to stage an early international match, the city set about planning a new stadium that would be fit for the Spanish National Football Team as well as the home town club.
Club president and Mayor of Oviedo, yes one Carlos Tartiere, had grand plans for the ground and in 1931, he commissioned Juan Junquera to design a main stand for the new stadium that would initially bear the name of Campo Buenavista. Junquera did not disappoint, creating a reinforced concrete stand with a deep overhanging roof, one of the first of its kind. It was named the Tribuna Sanchez del Rio after a leading structural engineer of the time. Opposite this magnificent new stand stood a wide, open terrace, whilst further terraces stood behind each goal, the eastern one featuring a tower at its rear.  The new stadium was inaugurated on 24 April 1932 when Spain beat Yugoslavia by two goals to one in that coveted first international.
Real Oviedo debuted in La Primera in 1933, finishing in sixth place in its first season then clocking up successive third place finishes. This was thanks in part to the remarkable scoring feats of Isidro Lángara. Then, just as they appeared to be on the cusp of something big, fate intervened in the shape of the Civil War. Regrettably, the city of Oviedo and in particular the stadium, took a fearful pounding. Such was its state of disrepair that the Spanish Federation granted the club a moratorium when the league resumed in 1939. When the club was ready to continue in 1940, it was readmitted into La Primera, no questions asked.

The refurbished ground saw the main stand restored to its former glory and a new cover erected over the terrace at the west end. The remainder of the ground was made up of banks of open terracing and in centre of the south side stood a small tower. The stadium was still surrounded by open land and was the archetypal provincial football ground. Following their return to footballing matters, Real Oviedo made a decent fist of their opportunity and managed to stay in La Primera until 1950. Relegation in 1950 was compounded by the death of president and benefactor Carlos Tartiere and the club struggled both financially as well as on the pitch. The Campo Buenavista was sold to the municipality in May 1954, then leased back to the club at a peppercorn rent, and the stadium was renamed in honour of their former president on 22 July 1958.
Real Oviedo returned to La Primera action for the 1958/59 and over the next seven seasons, managed to clock up a couple of decent finishes. Sixth spot was achieved in 1959-60 and a remarkable third place in 1962-63. However a return to La Segunda in 1965 saw the club spend the bulk of the next 25 years in the second tier. The only change to the stadium was the addition of a floodlights which were switched on for a friendly with Real Madrid on 4 June 1969, and the addition of a cantilevered cover over the southern terrace in 1970. This sat awkwardly, uptight to the tower, whilst the two floodlight pylons pierced through the roof and were anchored on to the terrace below. The stadium's other floodlights were arranged on a gantry that ran along the front of the roof of the main stand. Oviedo made a couple of fleeting visits to the top division in the early 1970's, but also dropped to Segunda B for the 1977-78 season. In fact, the main highlight during this period was the city's surprise inclusion as a venue for the 1982 World Cup. I say surprise as you can see that Real Oviedo was hardly a first division stalwart and Sporting Gijón's much larger El Molinón stadium, just 18 miles up the road, was also chosen as a host.
By 1980, the landscape, if not Estadio Carlos Tartiere, had changed dramatically.  Gone were the open fields and the two small houses behind the east terrace, and in their place stood high rise urban development. Architect Florencio Muniz Uribe had a tricky job of rebuilding a stadium under the very noses of the local residents. The Tribuna Sanchez del Rio had not weathered well, so it was replaced with a modern main stand, whose roof was metallic rather than concrete. This theme was continued around the other three sides of the ground, with the end stands slightly lower than the two side enclosures. The new stadium layout was inaugurated on 29 April 1982, when the home side entertained the Chilean national side. With a capacity of 22,284, it was the smallest of the venues used in España 82 and saw three matches featuring Algeria, Austria and the returning Chileans.

The latest version of the Estadio Carlos Tartiere offered little, if anything in the way of radical architectural design. It was modern, bright and functional. There were some nice touches, such as the walls at the back of the end stands featured the shields of the 23 supporters' clubs branches found throughout Asturias. The stadium was also the first in Europe to feature an electronic ticketing system and whilst it is now the norm, it created a lot of interest when it was installed back in 1988, including some enquiries from English clubs, who were under the cloud of Thatcher's Identity Card fiasco (Remember that?). Real Oviedo returned to La Primera in 1988 and stayed there for the next 13 seasons and attracted good crowds to the stadium.
The Spanish National side returned to the city for the first time in 56 years when it lost 1-2 to Yugoslavia in September 1988. Three years later, La Selección returned to beat Uruguay 2-1. The club wanted the municipality to extend the stadium up to 40,000, but lack of funds and its cramped location meant that, despite being little over a decade old, it was already past its sell by date. This was compounded in 1998, when the stadium had to be converted into an all-seater arena which saw the capacity drop to 16,000. In the end a solution was found when the municipality agreed to build a new stadium around a kilometre to the west and the old stadium was identified as the new site of the Palacio de Congresos, the home of the Asturian Regional Parliament.
The Estadio Carlos Tartiere saw its last game of football on 20 May 2000, when Real Sociedad turned up to spoil the party with a 0-1 victory. The club began the 2000-01 season at the new 30,500 seat Estadio Carlos Tartiere, but had a dog of a campaign and was relegated to La Segunda. As for the old stadium, it lingered on for a while before the demolition teams turned up on 15 January 2003 and set about the eight week process of raising the old stadium to the ground. In its place has risen the striking new parliament building that resembles something you would see flying around in an episode of Star Trek. Fortunately, its occupants boldly go no further than the borders of Asturias. 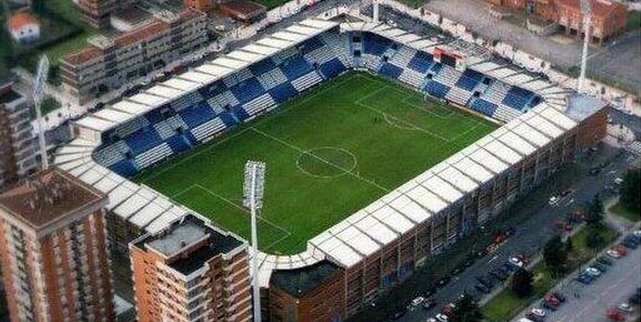 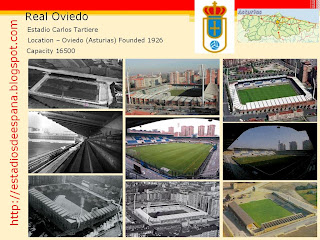