On the bank of the Rio Galindo, just a few miles north west of central Bilbao, sits the distinctive home of Barakaldo Club de Futbol. The new Campo de Lasesarre opened in 2003 and occupies a site some 100 metres from the club's old Lasesarre ground, which they vacated in 2000.
For three years, whilst the whole area surrounding the old stadium was redeveloped, Barakaldo CF played at the Campo de San Vincente, a small municipal athletics stadium around half a mile south west of the Lasesarre area. The new stadium was built by a development company, Ria Bilbao 2000, who reached an agreement with the local municipality to build the stadium in return for 15,000 m2 of land, which could be developed for residential use. The cost of the stadium came in at 866m pesetas or around 5.1m euros. On 30 September 2003, the new Campo de Lasesarre opened its doors with a friendly against cross-city giants, Athletic Club de Bilbao.
The stadium was designed by architect Eduardo Arroyo, and its form is unique, playing with the traditional conception of how a football ground should look. Light is at the forefront of the design, with translucent panels ensuring the interior is flooded with natural light during the day. In addition, the front edge of the roof has sections cut away, which again throws shafts of light on to the interior. To ensure that the fans do not receive a soaking, there are no sections of seating beneath these voids, ensuring that the stands have an interrupted, staccato feel to them. At night, lights within the translucent exterior ensure that the stadium has an almost incandescent white glow. It's a theme that was also used in the development of the Estadio Nueva Balastera in Palencia.
The seating is made up of a series of brightly coloured seats, which give the appearance of full occupancy, even when the stadium is empty. The players & officials changing facilities are accessed via a ramp in the south west corner, whilst the north west corner has a similar arrangement for the groundsman's equipment. Club offices are also contained within this block. Instead of being a separate entity, the floodlight towers rise out of the body of the stadium. Rather than pointing towards the pitch, these towers are at right angles to to the playing surface, however their lighting gantries are angled to ensure illumination. The coup de grace however is provided by the stadium's exterior which is made up of a series of turrets, which undulate around the stadium, like a cubist wave. It's all very daring for a stadium, yet in keeping with the new wave of urban architecture that has exploded across the city of Bilbao in the past decade.
Not that the fans of Barakaldo are that impressed. They clearly miss the communal huddle and freedom that the terraces of the old Lasesarre provided. The Lasesarre also saw a period in the 1990's where the club was regularly challenging for promotion to La Segunda. Since moving to the new stadium, Barakaldo CF has made the play-offs on just the one occasion, then in May 2011, the club dropped to the Tercera for the first time since 1988. The fans views have certainly been coloured with the downturn in the club's form that has coincided with the move to the new stadium, and this has led to accusations that the new stadium is more of a tourist attraction, than the intimidating fortress that they once called home. The stay in the fourth tier lasted just a season, so maybe, just maybe Barakaldo fortunes may be on the up.
The new Campo de Lasesarre (Not, I hasten to add the Estadio Nuevo Lasesarre) is a striking piece of architecture that plays with your own notions of what you have come to expect in a stadium. I am all for exciting and challenging stadium architecture, but it has to deliver on the simple premise of does it work, and I'm not so sure that it does. It really belongs in Legoland, not La Liga. 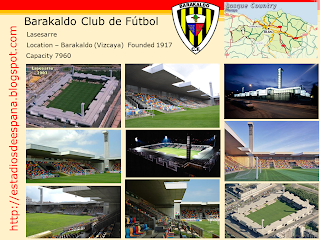