Until the arrival of club president Fernando Roig, Villarreal Club de Futbol was a small concern. In fact it did not have an official reserve side until 1999. Up to that point, various local clubs had acted as unofficial nurseries, developing players who were then, if good enough, referred to the club. With the promotion of top level in 1998, plans were made to set up an academy to develop the local talent. Little over over a decade later and with five promotions under its belt, Villarreal CF B play in the second division and the academy is unquestionably the most successful in the Valencian Community.
After registering with the Spanish Federation in the summer of 1999, the club made quick progress, winning the Regional Second Division and First Division titles in consecutive years. There followed two seasons in the Regional Preferente, before promotion to the Tercera was won at the end of the 2002-03 season. That 02-03 season was the first played at the Ciudad Deportiva, the club's new training complex which is situated to the northwest of the town. Prior to that, home matches were played at El Madrigal, which seems an opportune moment to show you a picture of the stadium in its 2002 glory.
After such rapid progress, there followed a period of relative consolidation. I say relative as the club was still doing a fine job, with a third place finish place finish in  2003-04 and the Tercera title in 2005-06. The only blot on the landscape was two failures in the end of season play-offs, but after a second place finish in 06-07, Villarreal B dispose of UD Poblense and CD Mirandés in the play-offs to win a place in Segunda 2b. The debut season in the third tier saw the club finish in a respectable eleventh place. With the squad strengthened for the 2008-09 season, the club enter a season-long battle with CD Alcoyano for the Group III Segunda title, which ultimately sees Villarreal finish second. Unperturbed, the club entered the play-offs with confidence, beating Zamora CF by 4-0 on aggregate in the semi-final. Real Jaen provided more stern opposition in the final, and a scoreless draw at the Ciudad Deportiva, saw the club travel to Andalucia as underdogs. However, a priceless 1-2 victory saw Villarreal B win promotion to La Segunda.
Villarreal B was a revelation in the first season in La Segunda. Playing by all accounts the most attractive football, the club finished seventh, earning coach Juan Carlos Garrido a crack at managing the first team. After a promising start to the 2010-11 season, Villarreal B's form dramatically fell away as they lost 13 of the last 17 regular season fixtures, finishing in a lowly seventeenth place. The club completed three seasons in the La Segunda, finishing in a respectable 12th place in that final season. However, the first teams relegation from the top tier put pay the the reserves second division ambition and they were demoted to Segunda B in June 2012.
Although the Ciudad Deportiva complex has eight pitches in total, the main arena is the 3,000 seat 'Mini Estadi'. This has banks of yellow and blue seats on three sides of the pitch, the north-west side featuring a curved cantilevered roof. This is 30 metres in length and sits towards the south-west corner, between the half-way line and the penalty box. Behind the this stand is the club's headquarters and accommodation for the youth team. For a town the size of Vila-real to have had not one, but two teams in the top professional leagues in Spain is frankly incredible. Over the past two decades, countless chairmen have thrown money at clubs, but their plans have had feet of clay. It is to the eternal credit of Fernando Roig that Villarreal is not  viewed with envy, but looked upon with admiration for the sound nature of their achievements on and off the pitch. 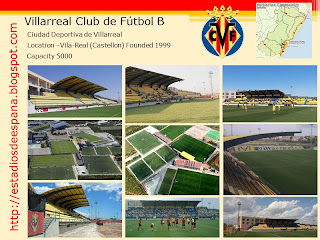