In the far east of the Region of Castile-León lies Soria, one of Spain's smallest and it has to be said, sleepiest provincial capitals. The town's senior team, Club Deportivo Numancia de Soria, takes its name from the ancient Celtiberian town of Numantia, whose remains can be found a few miles north of Soria.
Founded on 9 April 1945, Numancia made a stellar start to their professional career by reaching La Segunda in 1949. The stay lasted just 2 seasons, before they did their very best  to convey Soria's sleepy image to the rest of Spain, spending the better part of 40 years in the Tercera or regional leagues. These early years saw home matches played at Campo de San Andrés, before a move to Campo de San Juan in 1974. This ground was situated in the village of Garray, around 5km north of Soria, and it remained home for 15 years. The final match at San Juan saw Numancia clinch promotion to Segunda B in style, thrashing Endesa Ponferrada 8-0. The ground is now home to CD San Jose, and has changed little in the past couple of decades.
On the 5th August 1989, Numancia moved to a new municipal sports complex to the south of the Soria, called Los Pajaritos, or little bird. Over the next decade, Numancia made steady progress eventually winning promotion to La Segunda in 1997. That first season proved difficult with the club retaining its status with just two points to spare. The following 1998-99 season saw Numancia confound the experts and finish third in La Segunda. Thanks to Atlético Madrid B finishing second, but unable to gain promotion, Numancia found themselves in La Primera. A few months prior to promotion, in January 1999, the club had moved to a new  stadium. This 10,200 seat stadium was directly next to the Estadio Municipal Los Pajaritos, but was entirely enclosed, offering  fans much needed shelter from the notoriously cold Castile-León winters.
The club confounded the sceptics in its first season in La Primera clinging on to safety in seventeenth place as Real Betis, Atletico Madrid & Sevilla all dropped to La Segunda. They could not repeat the feat in 2000-01 and finished bottom of the table, but only three points from safety. On returning to the second, Numancia was expected to challenge for promotion, but only just avoided a disastrous second descent when finishing seventeenth. The team delivered a slightly improved performance in 2002-03 when finishing fourteenth. Then, in 2003-04, Numancia rediscovered the form that had seen the club promoted four years previous. Home form was a crucial factor, with 14 wins and just two defeats in their 21 matches. Third place saw the club take up its place in La Primera, but the capacity of the Estadio Nuevo Los Pajaritos was reduced to 9,025 in order to comply with La Liga's regulations on the proximity of the crowd to the pitch. In effect, the front two rows were left empty for home matches. There was to be no repeat of their earlier heroics as the club finished nineteenth, seven points from safety.
A further three seasons passed before Numancia claimed their first Segunda title in season 2007-08 and so the club was promoted to La Primera for the third time in 10 seasons. Once again the stay at the top lasted just the one season, but what the club has achieved on a fraction of the budget of even a small top flight club is astonishing. Based on sound management and a productive youth policy, Numancia can rightly claim to be the regions second most successful club.
The Estadio Nuevo Pajaritos is an ideal arena for a small regional club like Numancia. Built in double quick time between September 1998 and January 1999, it cost a total of 14 million euros, 12 million of which was funded by the municipality. In some ways, the stadium is a bit of a throw-back given that much of the structure is wooden, a material that architects José Soriano and Enrique Jiménez correctly identified as being better suited to the temperature extremes that Soria experiences. In addition, the exposed pine roof beams add a fantastic contrast to the red and blue seats, as well as adding a touch of quality, which the corrugated cladding sadly lacks. The stands are square and close to the pitch and offer excellent views. The main stand, on the west side, has a small directors box above the players entrance and tucked up in the eaves of the roof are TV and media gantries. The cost and speed of the build attracted a lot of attention and a couple of years later the design was practically copied when Zamora CF opened the Estadio Ruta de la Plata. As the say, imitation is the sincerest form of flattery. 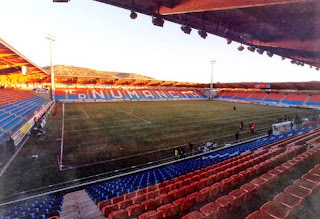 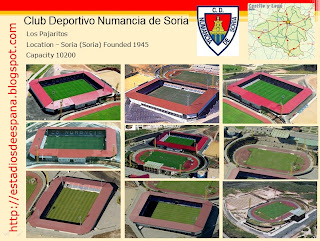 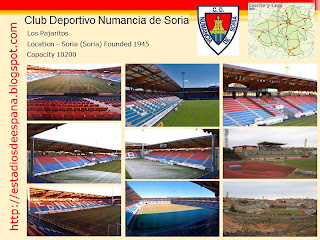