Sevilla is all about heat and passion. It’s officially ’s hottest city and the home of flamenco & Carmen. A couple of times each year the temperature and desire shoot off the scale as Sevilla Fútbol Club and Real Betis Balompié lock horns. Further spice is added to the concoction when you learn that Betis emerged into this world when discontented members of the then fledgling Sevilla FC, left to form their own club in 1908. When it comes to global warming, this corner of Andalucia has a lot to answer for.

For all its uniformity and frankly tired demeanour, I still love the Estadio Ramón Sánchez Pizjuán. You see this stadium has an aura about it, that when full, makes it one of Europe's most intimidating arenas. Add to that the sleek lines of the roof and the brilliant contrast between the green of the pitch, the red & white of the seats and the deep azure of the Andalucian sky and you have one sexy stadium. It's not just me and the faithful of Sevilla Fútbol Club who like the stadium, La Selección is also rather found of it, although one suspects that this has more to do with their unbeaten record here, rather than appreciation of its sartorial elegance.

There is no denying the fact that the stadium has seen better days. Like a fading movie star, the Ramón Sánchez Pizjuán cannot rely on a soft focus lens to hide the cracks and wrinkles for too much longer. The municipality would like the club or Betis to share the Olimpic stadium, a soulless  white elephant that was built on La Cartuja island at the turn of the century. It may prove to be a short-term option should the club redevelop the current stadium. With little in the way of funds however, selling the land on which the stadium stands may prove to be the most likely outcome, but only once the economy picks up. In the meantime, let's enjoy, no celebrate this fantastic stadium because once it's gone, nobody will  build another like it. 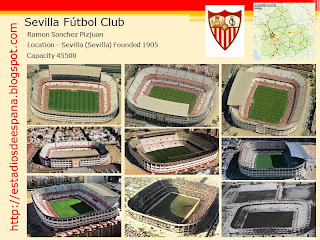 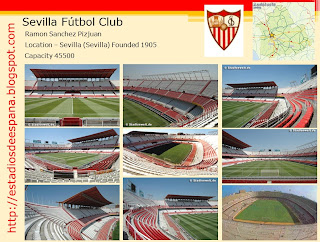