Isn’t it a shame that there are few, if any, examples remaining of stadiums from the first half of the twentieth century? Sure there are old stadiums that have been regenerated, refurbished and rebuilt, but are there any left that look, feel and smell the way they did 50 or 60 years ago? I appreciate the impracticalities, both physical and financial of keeping such a structure going, but wouldn’t it be great to be able to visit and experience a piece of footballing heritage? If I could resurrect just one stadium from the past, I think would go for an unlikely candidate in the shape of Racing Santander’s old El Sardinero.

Now I appreciate that it’s not an obvious choice, Barcelona’s Les Corts would top many a poll, but El Sardinero was a mix and match of different stands and whilst it lacked the grandeur of Les Corts, or the scale of Madrid’s Metropolitano, it did have flair. Opened in 1913, El Sardinero was the first ground used by the newly formed Santander Racing Club, named Racing in honour of that year’s cup winners, Racing Club de Irun. The Irun influence did not stop there, as the club adopted the red and white colours of Sporting Club de Irun. Racing got off to an inauspicious start at the ground, losing 0-5 to Gimnastica Torrelavega, but within a couple of seasons it had won the Copa de Luis Redonet, a competition for Cantabrian teams. The ground saw its first significant development in 1916 when a wooden grandstand was erected. It was 30 metres in length and featured a directors box and changing rooms.

In 1916, Racing joined the northern federation, but was up against much stronger Basque teams and initially struggled to impress. However, in 1920 English coach Fred Pentland took charge of the team and two years later, led them to runners-up position in what was at the time Spain’s strongest league. The Northern Federation made way for separate regional bodies in 1923 and with a lack of any real local competition, Racing started to play a great number of friendlies against foreign opposition. Racing  developed the ground with money raised from these matches, adding covered end terraces behind the north and south goals and extended the open terrace on the east side, close to the beach. On 17 April 1927, El Sardinero staged its first international match, when Spain beat Switzerland with a single goal from Racing’s Oscar. A year later and Racing beat off opposition from Betis, Sevilla and Valencia to claim the tenth and final place in the first division of the new national league. That first season saw Racing finish tenth, but beat Sevilla in a play-off to retain its top flight status. Results improved and under the guidance of another English coach, Robert Firth, the club achieved its best ever finish of second in 1930-31. Racing achieved a third place finish in 33-34 and a fourth place two years later, before the Civil War ripped the club apart.
During the war, international players García and Larrianga died in battle, whilst Gomez joined Atletico Madrid in 1939. El Sardinero was also used as a detention camp following the Nationalist's capture of Santander in August 1937. Left with a team of veterans and inexperienced players from its reserve side, Rayo Cantabria, Racing struggled throughout the 1939-40 season, eventually finishing bottom. The 1940's were dire times as the club endured season long stays in the Tercera in 1943-44 and again in 47-48. Promotion and the second division title was secured in 1949-50, before Racing settled in to a five year stay in La Primera. El Sardinero saw some additional work as the main stand was extended length ways and the east terrace upwards. In 1954, faced with the closure of the privately owned ground, Racing purchased the site for 3.25 million pesetas. Owning their own home did not have the desired effect as the club finished 15th in the following 54-55 season and was relegated back to La Segunda. It took five seasons to regain a spot in the top flight, but they did so in style with the second la Segunda title. What's more, plans were in place for an exciting addition to El Sardinero.

Work started in the summer 1961 on a daring new cantilevered stand, quite unlike any other in Spain. At 72 metres in length and made out of pre-cast concrete sections, its dominant feature was a huge curved roof, which despite it's size had an elegance that mirrored the shape of the waves that crash onto the Playa El Sardinero. The stand was built behind the existing tribuna, but did not include new changing rooms. These still remained in the old clubhouse, located in the south-west corner of the stadium. The old stand was demolished at the end of the 1961-62 season and the pitch was extended and moved a few metres westwards. A year later, just in time for the clubs golden jubilee, floodlights were installed, but by then, Racing had dropped back into La Segunda. The club spent the majority of the next decade in the second flight, even dropping to the Tercera for two seasons from 1968. By the time of Racing's next appearance in La Primera, in 1973, the east terrace had gained a full length propped cover. 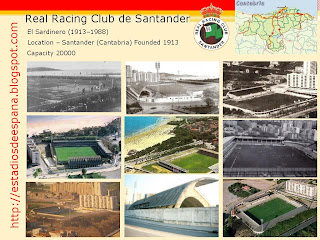