Safety concerns over the stadium came to a head in June 2013, when the local council closed it to all spectators. Atlético spent the 2013-14 season at the Estadio Magaluf, and then decamped to the Campo de Son Malferit de Palma in August 2014, which is around 500m south of the Estadio Balear. In June 2014, the local council agreed a €650,000 refurbishment of the old Estadio Balear which will see the demolition of the large, open, horse-shoe shaped terrace. It will be replaced with three much smaller, free-standing terraces, whilst the main covered tribune will remain, albeit detached from the rest of the ground. The new capacity will stand at 8,000 and work is due to be complete by January 2015. Atlético for their part, have agreed to use the revamped stadium for a minimum of 10 years. 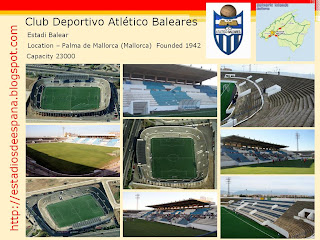