Think Catalunya and too many people just think of Barcelona. However, around an hours drive north east of the regional capital is the wonderful ancient city of Girona. It stands high on a fortified hill above the Rio Onyar and it is said that the city has witnessed a battle in every century since the Romans first built the fortress of Gerunda two millennia ago. Nowadays, the nearest the locals get to being besieged is a trip to the Estadi de Montilivi, home of Girona Fútbol Club.
As with the rest of the region, football became popular in Girona at the turn of the century, but the city did not have a representative in the Catalunyan Regional League until 1920, when Union Deportiva Gerona was formed. Hopes were high and money was spent on acquiring a squad, including overseas players and building a ground, which was named the Campo Vista Alegre and opened on 29 July 1922. Trying to compete with the likes of Barcelona and Espanyol soon proved to be a folly and the club was wound up with debts of 200,000 pesetas on 24 July 1930. The very next day Gerona Foot-ball Club is formed and took up residence at Campo Vista Alegre. Over the next four seasons, the club worked its way through the regional leagues and the Tercera before debuting in La Segunda in the 1934-35 season, where Gerona FC achieved a creditable fourth place. Building on this promising start in the second tier, 1935-36 saw the club claim the title in their regional section of La Segunda and enter the play-offs. They were however, out gunned by Celta Vigo and Real Zaragoza.
Now, I appreciate that there is never a good time to have a Civil War, but with Gerona on the cusp of potentially something big, the commencement of hostilities cut the club off in its prime. The club competed in the wartime Mediterranean League, finishing third, but when the war intensified and the Campo Vista Alegre was damaged in an air raid, football in Girona stopped. When fighting ceased and the league started up again, the club shorn of its best players put in some creditable performances, but never came close to promotion. They dropped back into the Tercera in 1943 and whilst they returned to La Segunda at the end of the decade, they struggled and was relegated again in 1951. There was a brief respite between 1956-59 when second flight football returned to the Campo Vista Alegre, but the Tercera was the club's natural level and here it stayed until the mid seventies. Whilst the club's league position remained static, it did leave Campo Alegre in 1970 to a new stadium close to the city's University at Montilivi.
The Nuevo Estadio del Gerona Club de Fútbol as it was originally known, was typical of many builds of this era, as it featured a concrete cantilevered stand, around 60 metres length and a single tier of terracing around the rest of the pitch. It is almost identical in style, if not size to the Nou Creu Alta that was built in Sabadell three years earlier. The stadium was officially opened on 14 August 1970 when nearly 25,000 attended a friendly against Barcelona. The change of stadium brought no immediate upturn in form and Gerona played on in the Tercera until they became a founder member of Segunda B at the start of the 1977-78 season. There followed a couple of decent seasons before the club dropped back to the Tercera. Worse was to follow when the club, now named Girona Fútbol Club, dropped to the Catalan Regional Preferente at the end of the 1981-82 season. Whilst the stay at this level lasted just the one season, financially the club was crippled and had little option but to sale the stadium to the municipality at the beginning of 1984.

Over the next twenty years, Girona FC won promotion to Segunda B on three occasions, but also dropped back into the regional league for two seasons from 1997. As you would expect, attendances dropped and some areas of the ground fell into disrepair, most noticeably the east terrace, which was effectively abandoned from the mid 1990's. Whilst the stadium looked a mess, Girona FC was turning in some tidy performances on the pitch, returning to Segunda B for the 2003-04 season and after a brief spell back in the Tercera, the club won the Segunda B title in 2007-08. In the play-offs, Girona FC first disposed of Barakaldo CF and then AD Ceuta in the final and after a 49 year absence,  had returned to the second division.
Whilst the team appeared to be ready for life in La Segunda, the stadium required a major re-fit. Seats were installed on the north and south terraces and the main stand was also refurbished with new seats, changing rooms and media facilities. The east terrace was however beyond saving, so the club began the new season playing in a three sided stadium. In fact it took until June 2010 for the east terrace or the grada lateral to be completed, by which time the official capacity stood at 9,282. Montilivi hardly gets the pulse racing and is pretty standard 1970's fayre, but at least it has been saved from falling in to further disorder. Now in their sixth consecutive season in La Segunda, Girona's ensure that no team leaves Montilivi without knowing it's been in a battle. 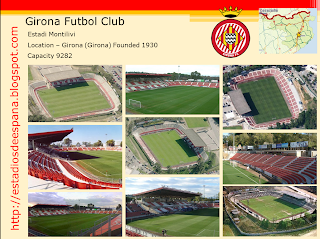