Football in this small town 25 miles north of Malaga has a distinctly chequered history, with the relative highs of a few years in Segunda B, far outweighed by countless seasons spent in the Tercera and regional leagues. The town's current senior club Antequera Club de Fútbol, cannot shoulder all the blame, having only come into existence in 1992, following the demise of its predecessor Club Deportivo Antequerano.
Founded in 1939, CD Antequerano first reached the Tercera in 1946, but their stay ended after two seasons and they did not return to this level until the start of the 1954-55 season. Over the next dozen seasons, the club flattered to deceive, achieving a series of top ten finishes, but never coming close to promotion. Following relegation in 1966, Antequerano languished in the regional leagues for 13 seasons, before a returning to the Tercera for the 1979-80 season. Home back then was the  Campo de Municipal, which stood in the shadow of the town's Plaza de Toros.  This was a basic enclosure with a dirt pitch and little in the way of amenities. Then, out of nowhere, the Tercera title was won in 1980-81 and Moscardó and Telde were beaten in the play-offs to earn promotion to Segunda B. The club could not continue at to play at such a rudimentary ground, so during the summer of 1981 work commenced on a patch of land barely 400 metres to the south west. On 6 September 1981, Antequerano entertained AD Ceuta at the new Estadio El Mauli, winning by 3 goals to one.
Antequerano made two valiant attempts to reach La Segunda, finishing fourth in Segunda B in both the 1981-82 & 82-83 seasons, before the money ran out and it found itself back in the Tercera at the end of the 1984-85 campaign. Six years of diminishing returns followed, before relegation to the regional leagues in 1991 signalled the end. With a stadium that was just over ten years old, there was enough local interest to form a new club, and in 1992, Antequera Club de Fútbol was formed. The club 'merged' or rather purchased Puerto Malagueño, and debuted in the Tercera league in 1993-94. Over the next decade or so, the club hung on to its fourth tier status until a disastrous 2003-04 campaign saw Antequera relegated to the Regional Preferente with a pitiful total of just 15 points. Two seasons later and a reinvigorated club returned to the Tercera to secure 6th place, and a season later, runners-up spot was followed by victory in the play-offs over Naron and Caravaca in 2008. Their stay in Segunda B lasted just the one season, with the club finishing sixteenth, then losing to Terrassa over to legs in the relegation play-offs. Two mediocre seasons in the Tercera followed, before the familiar pattern of probable relegation to the regional leagues emerged throughout the 2011-12 season.
The Estadio El Mauli looks much older than its actual age. If somebody told you it was built in the 1950's, you would probably believe them. Built into the side of a shallow hill, over half of its 7,000 capacity is housed on a large open bank of green steps-come-seats on the east side. The only other developed part of the ground is on the west side, where small 30 metre seated stand sits on the half-way line, which is flanked by terraces which extend to the touchlines. The wedge shaped stand was originally left open when the stadium opened in 1981, but gained a roof prior to the club's ascent to Segunda B in 2008 . Behind each goal are large banks of earth and one wonders if these were part of a grander plan to develop the stadium had CD Antequerano gone on to greater things. El Mauli however, seems destined to remain unfinished and slightly shabby, and it doesn't take a great philosopher to draw parallels with its resident clubs. 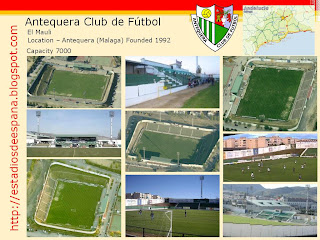