After the end of the Civil War, many of the elite clubs in Spain faced a similar problem with their playing staff. Those first team players who had avoided injury were getting on and there was also a dearth of young players playing the game. Valencia CF recognised this problem and gave the task of resolving the inadequacies of their youth system to a former player,  Leopoldo Costa or “Rino". Rino scoured the local leagues and identified one team, Club Deportivo Cuenca, who took their name from the street where they were located in Valencia, as the best and within weeks of finishing the 1943-44 season as Regional Division III champions, CD Cuenca was absorbed into Valencia CF and took on the mantle of the reserve team. The name of the second string would be Club Deportivo Mestalla.
﻿CD Mestalla took over the place in Regional Division II that CD Cuenca had earned and set about a rapid rise that saw three successive promotions and a debut in La Segunda for the 1947-48 season. Playing their matches in the Mestalla, or Estadio Luis Casanova as it was then known, CD Mestalla continued to impress and in 1951-52 became the first reserve side to finish in a promotion placing. Then, as now, reserve teams were ineligible for promotion, but it is a sign of the team's strength that after finishing the regular season in second place and qualifying for the play-off group, they finished top losing just one of the ten additional matches. Whilst the heights of 51-52 were never scaled again, CD Mestalla was practically a permanent fixture in La Segunda throughout the next two decades, before bowing out for the last time at the end of the 1972-73 season.
The majority of the next twenty years was spent in the Tercera, except for a brief visit to the Regional Preferente in 1976-77 and Segunda 2b in 1987-88. The club trained on land in the Paterna area of the city after it was purchased in 1974, but it wasn't until the early 90's that it was developed into a sports city, or Ciudad Deportivo. Opened in 1992 and covering an area of 180,000 square metres, the facility features 6 natural grass pitches and an artificial surface. The main arena, or Mini Estadi has a raised cantilevered stand on the south west side and six steps of open terracing on the remaining sides. With a capacity of 4,000, it is perfectly suited for football in Segunda 2b, which is where Valencia B, as it was now known found themselves for the start of the 1992-93 season.
Paterna has staged Segunda 2b football for most of it's existence, however twice in the mid 90's and again in 2001-02, Valencia B has reached the play-offs for La Segunda, but has fallen short on each occasion. Since 2005 it has on three occasions, also dropped back into the Tercera. This may or may not be a reflection of the parent club's financial difficulties, but the first team has been forced to field more young home grown players in recent seasons. That said, the current crop can't be that bad, having just won the Valencian Tercera then turning over Alcobendas Sport 3-0 in the play-offs to win a place back in Segunda 2b for the 2011-12 season. 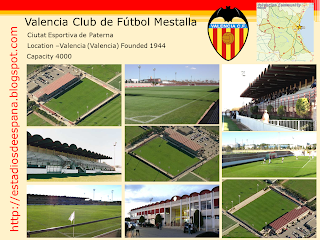