Huesca may be Aragón's second city, but until recently it was not home to Aragón's second team. In fairness, Real Zaragoza dominate all things football in this region and next best has often been a distant runner-up. Andorra FC, CD Binefar and even Zaragoza B have held the mantle and for a few years in the early 1950's Union Deportiva Huesca reached La Segunda. Alas, UD Huesca went to the footballing knackers yard in 1956 but their successor, Sociedad Deportiva Huesca, recently enjoyed a 5 year spell La Segunda. 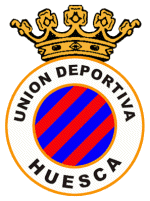 First, a quick history lesson. Football has been played in Huesca since 1909 and twenty years later the forerunner of UD Huesca, CD Oscense was formed. They changed their name to CD Huesca in 1931 and reached the Tercera for two seasons before the start of the Civil War. The club was reformed in 1940 and merged with CD Español to form UD Huesca. They played their matches at Campo de Villa Isabel which had a capacity of 6,000. They reached the Tercera in 1943 and two years later moved to Campo de San Jorge, a better appointed, but initially smaller ground. UD Huesca won the Tercera title 1949-50 and entered La Segunda.
Their first season was a remarkable success, finishing in fifth place and 3 points shy of a play-off place. Results at Campo de San Jorge were particularly impressive with 13 victories, including a 2-0 win over Real Zaragoza and just one defeat. UD Huesca finished in eleventh place in 1951-52 and in fifteenth place a year later. This meant relegation back to the Tercera. The play-offs for La Segunda were reached in 1953-54 and a return looked on the cards in 1955-56. That was before the Spanish Federation overturned a 2-0 victory against SD Montanesa for fielding an ineligible player. They also slapped on a 2-point penalty that ultimately cost them the title. UD Huesca did not have the heart and more importantly the money to continue and they folded in the summer of 1956.
On 31 March 1960, Sociedad Deportiva Huesca was formed and took on Campo de San Jorge as their home. They found immediate success when winning the Regional Preferente and then not a lot happened. A couple of Tercera titles in the late sixties failed to secure promotion and the club even dropped back into the Regional Preferente for the 1973-74 season.  By then, the club had moved a few hundred yards to the south west to a new ground, Estadio El Alcoraz, which was opened on 16 January 1972 with a match against Deportivo Aragón (Zaragoza B) which they won 2-1. They regained their place in the Tercera after just one season away, but a series of modest finishes followed before the league was restructured at the end of the 1976-77 season and eighth place was enough to secure a place in the newly formed Segunda B. the seven seasons that followed did not see Huesca trouble the teams at the top of the league and the additional expense of playing at this higher level saw the clubs debt rise to 40 million pesetas. Relegation arrived at the end of the 1983-84 season and Huesca would spend 15 of the next 20 seasons in the Tercera, with two short two-season spells in the early and mid nineties and a season-long visit  in 2001-02 breaking the tedium.
The start of Huesca's renaissance were not not particularly striking. A second place finish in the Aragón division of the Tercera in 2003-04 saw the club face SD Noja, who they beat 2-1 on aggregate and Eibar B who were defeated 3-1 over two legs. Season 04-05 saw a safe if unspectacular return to the third level with a tenth place finish and the following season nearly saw Huesca drop back to the Tercera. The club finished sixteenth in Group III and faced Castillo CF in the relegation play-offs. A 0-0 draw at El Alcoraz in the first leg did not bode well, but a 1-1 draw in the Canary Isles saw Huesca stay in Segunda B by the skin of their teeth. The team was rebuilt for the 2006-07 season and the results were immediate. Runners-up position was attained before CF Palencia were dispatched in the play-off semi finals. Cordoba CF were the opponents in the final and a 0-2 deficit from the first leg could not be overturned at Alcoraz. Undeterred, Huesca finished in second place again in 07-08 and this time they prevailed with victories over CF Gava and Ecija Balompie. If playing in La Segunda was reward enough, facing Real Zaragoza was a bonus. The region's big-boys had just been relegated from La Primera and a 2-2 draw at La Romerada was one of the seasons highlights. At the end of the season Huesca had achieved eleventh position, a remarkable turnaround from facing a drop to the Tercera three seasons previous.
El Alcoraz was built at the foot of the hills of San Jorge, and San Jorge and his flag features prominently around the club. He's there on the badge, the main entrance to the stadium and even the second strip features a red cross on a white background. The stadium looks every part the early seventies stadium that it is. Reliable and unspectacular. The main feature is the West Tribuna which was extended with the addition of a southern wing in 2009. The back of the stand was also extended to feature a new entrance, hospitality suites and improved communication facilities. The roof over the new section offered slightly more coverage than its 1970's neighbour, so to compensate, an additional screen has been added to the older portion of the roof.
There has been much talk over the past 3 to 4 years of a new ground, possibly next to their old Campo de San Jorge, however the current plans focus on redeveloping El Alcoraz. Opposite the main stand is the new grada general, a stand with eight rows of blue seats with the name of the club picked out in red. It has a straightforward, if somewhat high cantilevered roof which does not offer much in the way of cover, but plenty in the way of advertising space
At either end are open banks of seats and according to plans, this should be the next phase to be redeveloped, but following the club's return to Segunda B in 2013, this has been put on hold. Either way, SD Huesca has a perfectly functional stadium at a minimal cost, which is all rather prudent and allows the club to remain focused on football and a return to La Segunda. 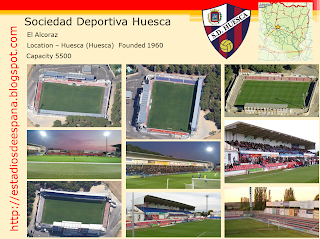