Gimnástica Segoviana Club de Fútbol was founded in 1928 as Sociedad Deportiva Gimnástica Segoviana and it has spent all but a couple of seasons in either the regional leagues or the Tercera. The pinnacle of the club's footballing achievement came in the Summer of 1999 when it won promotion to Segunda B. The zenith lasted one short season before they were relegated back to the Tercera at the end of the 1999-00 season. In fact Gimnástica's record in the Tercera is very good, having qualified for the play-offs 10 occasions, but as with many smaller clubs, this final hurdle often proves to be an obstacle too far.
Gimnástica has used a number of grounds before settling at La Albuera. Originally, the club played at La Dehesa until 28 June 1932 when they moved to Campo Chamberí. On 23 April 1944 the club played its first match at Campo Peñascal. Peñascal had a particularly troublesome dirt pitch with poor drainage. In May 1973, in an attempt to improve the surface so that it could handle two matches at weekends, a mixture of lime and cement was added to the dirt surface. Unfortunately it rained during the first two matches played on this chemical concoction and 56 players and officials ended up in hospital with burns. The ground remained closed for over a year until the local municipality was satisfied that the surface was safe.
No such troubles with La Albuera when the club moved there in June 1977, although it did have a dirt pitch. This was replaced with a grass surface in 1982. The main stand is 60 metres in length and has 674 seats under a cantilevered roof. The stand is flanked by two short uncovered terraces. Five steps of terracing did feature behind both goals, but these were demolished in 2010. Terracing also featured on the east side until 2010, when of the only significant change the the stadium's layout took place.
During the close season a full length stand was constructed opposite the main stand in place of the east terrace. This raised cantilevered stand has seven rows of mainly green seats, with "Segovia 2016" picked out in white seats. This is to promote the city's candidature for the 2016 European City of Culture. La Albuera's makeover was completed with the addition of a boundary fence,which is striped in various shades of green and matches the cladding of the new stand. All of which has changed La Albuera from a rather plain stadium to one that is still simple, but also vibrant.
With such an appalling record in the play-offs, you could excuse Gimnástica for approaching the end of season with some trepidation, but the form held up with victories over Arroyo CP and SD Noja. In the final they appeared to have blown their chance SD Logroñés won 0-1 at La Albuera. Gimnástica however recorded a stunning 3-0 victory in Logrono to book a place in Segunda 2b for the first time in 11 years. Alas, the stay in Segunda B was a short one. Gimnástica were slow to start and never really got going, winning only three fixtures in the second half of the season. The club finally finished 18th, three places and some 16 points from safety. 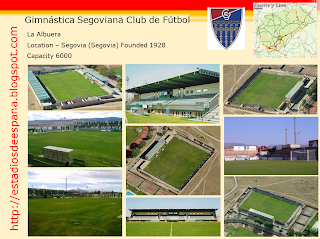