The rise of Unió Esportiva Llagostera under the guidance of coach Orio Alsina has been nothing short of meteoric. Since arriving in 2004, the club has won promotion on six occasions, the most recent occurring in June 2014 with a 4-3 aggregate win over Gimnástic Tarragona. The victory earned this club from a town in northern Catalunya (Pop. 8,200) a place in La Segunda.
Formed in 1947, Llagostera moved to their current ground on the southern edge of town in 1948 and things remained relatively unaltered both on and off the pitch for the next 60 years or so. With the club reaching the Tercera for the first time in 2008, the ground was remodeled with the playing surface being leveled and replaced with an artificial surface. Hard standing was added around the pitch, but the only cover remained unaltered on the north side of the ground. During the renovation, Llagostera moved a few miles east to play their home matches in the town of Santa Cristina de Aro. Whilst the new layout was an improvement, it is still a very basic enclosure and halfway through their first season in Segunda B, a new 30 metre open bank of seats was added to the left of the existing cover.
Llagostera acquitted themselves exceptionally well in Segunda B. In their first season they pushed to the very last game of the season for a place in the end of season play-offs, but lost out with a fifth place finish. They finished in tenth position in 2012-13, then won the league in third season. Despite losing to Racing Santander in the Campeón Play-offs, Llagostera saw off Real Avilés & Nástic to earn a place in Spain's second tier. All done on a budget of €400,000, one of the smallest in Segunda B.
The Estadi Municipal has seen some basic improvements in recent seasons. In October 2012 temporary stands were erected at either end of the ground,  when the club hosted Valencia in the Copa del Rey. Their top flight opponents won the match by two goals to nil. Whilst the temporary stand at the eastern end was removed, the open bank of seats at the western end remain. The current capacity stands at 1500, more than sufficient for the club's average attendance of 900.

It was its artificial surface rather than the size of the Estadi Municipal that ruled out any chance of it hosting matches in La Segunda. So Llagostera headed 20 miles east to the coastal town of Palamós. The Nou Estadi has hosted second-tier matches in the past when Palamos CF played in La Segunda between 1989-95. Its capacity of 6500 is unlikely to be tested though. The club averaged a crowd of only 950 when they were playing in Llagostera.  You can read more about the miracle of Llagostera in this  fantastic article from Liam Bainbridge on IBWM. 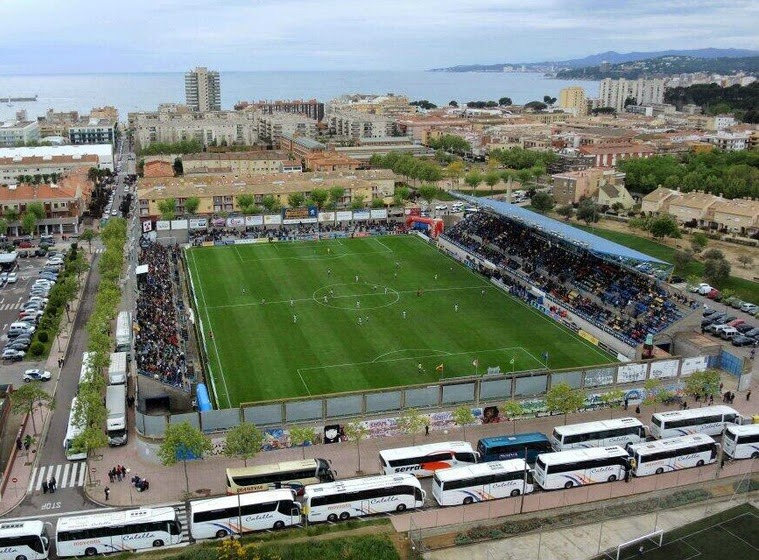 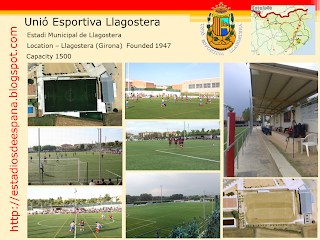