Organised football has been played in the Canarias since the early part of the twentieth century, but with no access to Spanish national competitions, matches were confined to island leagues and an overall Canarias regional championship. In February 1949, five leading clubs from Las Palmas met with the purpose of forming a united club that would be able to compete at a national level. Negotiations between the five, CD Gran Canaria, Atletico Club, Arenas Club, Marino FC & Real Club Victoria, were protracted, but the motion gained added momentum when the Spanish Federation agreed to the inclusion in the national leagues of a Canarias Championship on 6 June 1949. Finally on 22 August 1949, Unión Deportiva Las Palmas was founded.
The club had a ready-made stadium as the Estadio de Las Palmas (later renamed Estadio Insular) had opened on 25 December 1944 with a match between a select Las Palmas XI and a Select Port XI. On opening, it had a capacity of 8,000, but when it was purchased by the local municipality in 1950, it was extended to hold 25,000. UD Las Palmas played their first match at the stadium on 9 October 1949, with Marino FC in their last match as a professional outfit, as the opposition. The progress of the new club was rapid, taking up the position in the Tercera earned by Real Club Victoria, it earned promotion to La Segunda along with UD Melilla.

A fourth place in the second division saw the club enter the play-offs at the end of the 1950-51 season where they duly finished top of the mini league and won promotion with Real Zaragoza. So two years after being formed, the club was in La Primera. It was apparent however, that progress had been too swift, for their stay in the top tier lasted a season and UD Las Palmas was relegated having conceded 95 goals and losing all but one of their away matches. They returned to the top flight for the 1954-55 season and this time their stay lasted six seasons with a high finish of tenth in 1956-57.
The club's Golden Era began with promotion back to La Primera in June 1963. Steady progress was made until they earned a runners-up position behind Real Madrid in the 1968-69 season. UD Las Palmas qualified for the Fairs/Uefa cup on three occasions and in 1978 lost to Barcelona in the final of the Copa del Rey at the Santiago Bernabeu. This was by far the longest sustained period of success with their stay in La Primera lasting 19 seasons and seeing 8 top ten finishes. Relegation finally arrived in June 1983 and whilst the club returned to the top tier for a three season stint in the mid eighties, by the start of the nineties, they were at the wrong end of La Segunda.
The drop to Segunda B followed in June 1992 and with it severe financial difficulties. What was expected to be a quick visit to the third level turned into a four season long struggle, with the play-offs tripping up the club at the final hurdle in each of the first three seasons. Eventually UD Las Palmas prevailed, dominating their play-off group, winning their first five fixtures and finishing ahead of Elche CF, Gimnastica Tarragona and Cultural Leonesa. During this period, it has to be said that Insular was quite a spruce and atmospheric ground, with its 22,000 yellow and blue seats all in close proximity to the pitch. The only cover was on the north side of the stadium and  the largest bank of seats were arranged in three tiers behind the west goal. The outside of the stadium was a fairly bright affair as well, with its Art-deco style walls painted yellow with blue facings.
La Selección played at Insular on four occasions, the first coming in 1974 in a 2-2 draw with Yugoslavia. Three further visits in 1986 against the USSR, 1993 against Mexico and 1996 against Norway all resulted in home wins. By the end of the nineties however, it was clear that Insular was on borrowed time as it featured few of the facilities associated with a modern stadium, so in 2000 the municipality decided to start building a new stadium in the southern suburb of Siete Palmas. Insular was to get one last hurrah however, after UD Las Palmas returned to La Primera for the 2000-01. Unfortunately the stay lasted just two seasons and the club was back in La Segunda when it played its last ever fixture at Insular on 29 June 2003.  A 2-0 victory against Elche CF bought to an end nearly 60 years of football at the stadium.


Initially, plans were drawn up to build a shopping mall on the site, then talk turned to  redeveloping the stadium and bringing the club back to from the unpopular Estadio de Gran Canaria to the centre of town. Eventually, in May 2014, the local council started work on converting the site into a "Sports & Activity Park". 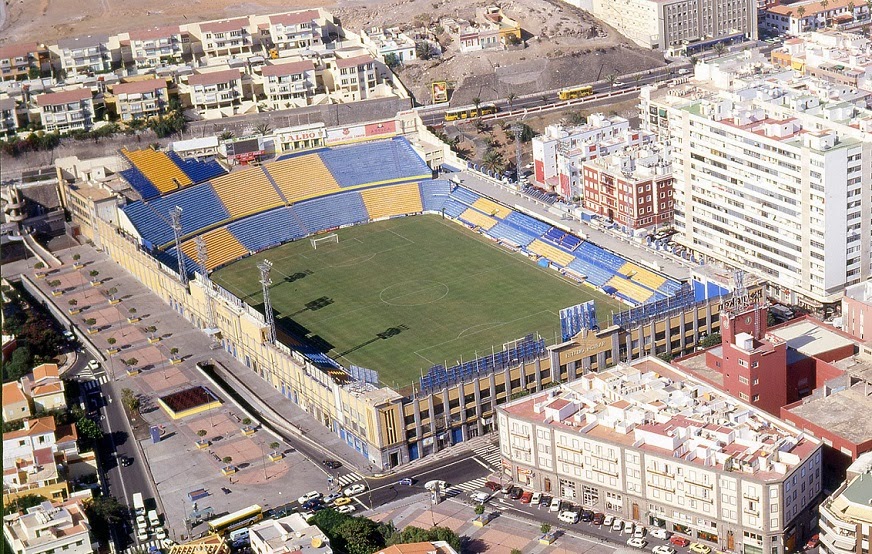 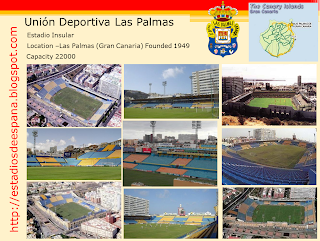