This little stadium in the village of Tanos made a surprise return to Segunda B in 2010. It was a surprise as the resident club, Club Deportivo Tropezón was still playing in the Tercera. You see, due to the redevelopment of the El Malecón stadium, Gimnástica Torrelavega moved a couple of miles south to set up a temporary home at the Campo Municipal Santa Ana.
Tropezón is a relatively new club having been formed by a group of friends in 1983 as a "cultural, sporting, recreational and gastronomic association". In those early years home games were played at El Prado, a rented field close to the centre of the village. Their first appearance in Segunda B occurred after their second Tercera title in 1998 and lasted just the one season, but the club bounced back for a further season in the third tier for the 2000-01 season. There followed over a decade of frustration back in the Tercera with a series of top ten finishes and seven appearances in the play-offs. The jinx was finally ended following the capture of a third Tercera title in 2013. Even then, the club took the long route, losing 1-4 on aggregate to Algeciras in the Group Winners Promotion Play-off Final. Tropezón picked themselves up and saw off challenges from Unión Adarve and Alzira to secure a return to the third tier for the first time in 12 years.
The Campo Santa Ana was inaugurated on 29 November 1998 with a local derby, when Gimnástica was held to a 0-0 draw. It features a half length raised cantilevered stand on the west side and hard standing on the remaining three sides. Temporary seating was installed behind the north goal and on the east side to accommodate the additional spectators during Gimnástica's 18 month stay, which started with a 2-0 victory over Real Oviedo on 5 September 2010. The Tanos-Torrelavega love-in came to an end in December 2011, when Gimnástica moved back to their re-built El Malecón stadium.
Gimnástica returned the favour when El Malecón hosted Tropezón in the spring of 2013 following the installation of a €330,000 artificial surface at Santa Ana. Any hopes of a Torrelavega local derby during the 2013-14 season were dashed however, following Gimnástica's demotion to the Tercera for failing to clear its debts. All of which leaves Tropezón as head cooks and Gimnástica as the town's bottle washers. 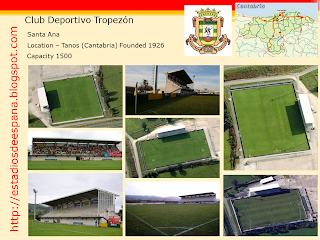