This extraordinary stadium, carved into the side of a hill at the top of a steep valley is a remarkable achievement for such a small and remote club, but CD Mensajero are used to remarkable achievements having played at Segunda B for a decade from the early 1990's, and very nearly reaching La Segunda.
Mensajero’s history can be traced to 1916 when a group of friends in Santa Cruz de la Palma formed a youth team. The team was officially registered with the federation on 6 January 1922, making it the oldest club on the Island of La Palma. A date disputed by the club's cross-city rivals SD Tenisca, who have a different take on the story, saying that Mesanjero was formed by former players from Tenisca in 1924, making them the Island's oldest club. It was the first of many disagreements that pepper the relationship between the two clubs. Mensajero established a senior team in 1939, thanks to the club's first president Silvestre Carrillo and both stadiums that have stood on this site have been dedicated to him.
The club spent roughly 70 years playing at regional level, with various degrees of success. It won the Tercera title for the Canary Islands in 1985, arriving at the national stage seven years later, after winning promotion to Segunda B. During the following ten seasons, Mensajero appeared in the play-offs twice, but failed to progress on each occasion. The expense of running a relatively small club at a national level began to take its toll and with dramatic cuts in funding, Mensajero was relegated at the end of the  2001-02 season, 11 points behind the penultimate team, CD Onda and 18 points from the safety zone. Two years later, they dropped down to the regional leagues, vacated Silvestre Carrillo  and set up home at the Municipal Estadio Bajamar, but also played matches at the Estadio Virgen de Las Nieves, home of SD Tenisca. Redevelopment of the stadium took four years to complete and Mensajero re-inaugurated their home on 14 January 2007 with a match against UD Orotava.
What of the stadium? Well, due to the steep valley-side to the south side of the pitch and the sheer drop to the north, the majority of the seating has always been found at either end of the stadium. Prior to the redevelopment in 2003, there was a covered stand at the east end of the ground. A narrow strip of terracing ran along the north side of the pitch, which joined the terrace behind the west end goal. Such was the size of the project, the club moved out whilst the north & east sides were excavated and rebuilt to include office space under the new, larger terraces. The old changing rooms that sat in the south east corner were also replaced.

Following redevelopment, the basic orientation of the stadium remained unchanged. There is however, a more substantial area of seating behind the east goal and this now arcs around to the north side. The east end no longer features a roof, something, which the original redevelopment plan included, but due the financial difficulties that the club experienced, the project was scaled down. The north terrace tapers away to a single line of seating as you head to the west. The West terrace remains relatively unaltered from the original stadium. The players changing facilities are found in a single storey building on the south side of the pitch.
But it is from the outside the stadium that you appreciate the magnitude of the task of building a stadium in this location. As you walk up Avenida del Puente from the centre of town, the stadium looms over you like a grounded ocean liner. Should CD Mensajero ever return to the heights they achieved in the 1990's, they will at least have a stadium that is totally ship-shape. 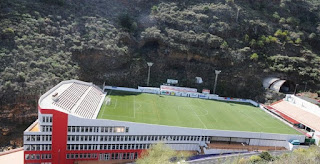 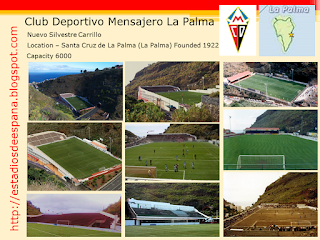