Over the past decade, many smaller clubs have moved to or redeveloped a stadium into a single stand arena. This has happened from Scotland down to Spain and whilst something is undoubtedly lost in the way of atmosphere, there can be no doubt about the money saved in building and maintenance costs. In 2006, Club Siero moved from their ramshackle Estadio Luis Miranda in the centre of Pola de Siero to the southern edge of town and the single stand El Bayu.
Club Siero was formed in 1916 and the Estadio Luis Miranda, which had been home since 1944, offered little in the way of home comforts. It housed 2,500, most of which stood under the ground's only substantial cover behind the southern goal. It was home however, when the club played its one and only season in Segunda B. Siero had earned the right to play in the third tier after finishing second in the Group II of the Tercera in 1999-00. In the play-offs, the club finished top of a group that also featured Salamanca B, RSD Alcala & Lalin. For such an inexperienced side, Siero put up a very good fight in Segunda B, before finishing 17th, just one point from safety.
Opened on 1 November 2006 with a friendly featuring the Spanish national women's side, El Bayu is a very decent attempt at a format that is hard to master. The only accommodation is on the north side of the stadium where a large stand has been constructed using the post and beam technique. This essentially sees two huge sets of goalposts built with a lightweight roof slung across the top. A seating deck and amenities are then built in the void beneath.
It helps if there are some distinctive touches and El Bayu does this in a few areas. For a start its floodlights resemble four sets of gallows with the lighting rig suspended from the cross beam. The main structure has been clad in a mosaic come chequerboard style. It has a capacity of 5,000, with the seating is confined to the central portion with standing either side. The lack of spectators on the other three sides is somewhat helped by the fact that it has been built into the side of a hill, but this has caused a few problems with drainage on the synthetic pitch.

Unfortunately, the stadium has not had a particularly positive effect on the fortunes of Club Siero, who would have hoped to have rekindled the success of the 2000-01 season. In fact last year the club was relegated from the Tercera to the Regional Preferente Asturia, and only some late season form staved off another drop. 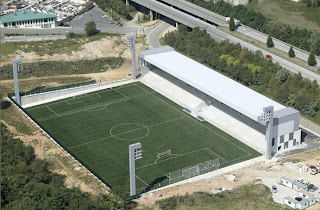 Recent performances have resulted in a blue Bayu 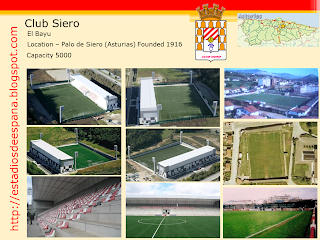