Due to its remote location in the north west mountains of Murcia, the town of Moratalla has always struggled to field competitive football teams. Over the years, a number of senior and junior clubs have tried and ultimately failed to establish a place in the Tercera. The latest representative, Moratalla Club de Fútbol is by far the town's most successful club, but even taking this into account, they have only clocked up six seasons in the Tercera since forming as Club de Fútbol Juventud Moratallera, a youth team, in 1976.
Promotion to the senior ranks in 1978 saw the club change to its current title and then spend all but the 1989-90 season in the regional leagues. That particular season saw the club debut in the Tercera, but it was completely outclassed, winning just 2 of its 38 fixtures and finishing bottom of the league with 12 points. It took a further fifteen seasons for the club to return to the Tercera, and it did so with the help of Euromania Costa Calida, a construction company and club sponsor. The investment finally paid off when Moratala finished second in 08-09 and entered the play-offs for promotion to Segunda B. Defeat to Alcala de Guadaira appeared to have put an end to any hopes of promotion. However, the financial demotion of Lorca Deportiva left a vacancy in Segunda B, which the Murcian Federation offered to Moratalla. Their debut in Segunda B ended in relegation, but overall the club acquitted themselves well finishing 17th. However, with its budget significantly cut, it struggled on its return to the Tercera, finishing 15th. With mounting debts, the club called it quits in July 2011.
The club's home ground was the  Estadio Casa Felipe, which was opened in 1988 following the closure of the Campo de La Alzabara. It is situated about 2km to the east of the town and despite a refit in 2006, is rather basic. The main seating deck is a wedge shaped building on the west side that holds around 250 seats above the changing facilities. The rest of the 3,000 capacity is made up of hard standing around the artificial pitch. 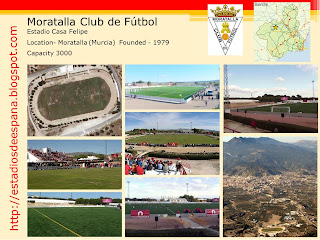