Club Deportivo Mirandés captured the imagination of the Spanish public with a magnificent run in the 2011-12 Copa del Rey. After defeating three teams from La Primera on route to the semi-finals, CD Mirandés has become only the second club from Segunda B to reach the last four. Cup exploits aside, very little is known about the club, so here’s your essential guide.
Miranda de Ebro was a late-comer to the sport of football, only setting up its first official club, Deportivo  Mirandés, in 1917. Over the next few years, the club played friendlies against other clubs from the Region of Burgos and the nearby Basque Country, often under the name of Sporting Club de Mirandés. It folded in 1922 and the city had to wait until 1927 for the current club, Club Deportivo Mirandés to be formed. After a season playing at the Campo de Krone, Mirandés moved to a field owned by the RENFE next to the main railway station in Miranda de Ebro. Unsurprisingly, the ground became known as La Estación.
Due to the city's position in the far north east of the province, the club joined the Cantabrian Federation in May 1934 and competed in the Regional Preferencia until the outbreak of the Civil War. Whilst friendly matches were played, the club did not reform until 1942. It took a further two years before the club rejoined a league, this time joining the Guipuzcoana Federation. The club stayed at La Estación until 1949, when the railway company served notice and built accommodation for its staff on the site, whereupon the Municipality stepped in and developed a field to the south east of the town next to the Rio Ebro. The Campo Municipal de Anduva was officially opened on 22 January 1950 with a match against CD Logrones, although the club had started the 1949-50 season at the ground.
CD Mirandés has spent the majority of its history in the Tercera, 50 seasons in total. There was a period in the late 1970's when the club had a few productive seasons in Segunda 2b, finishing third in 1978-79 and just missing out on promotion. Their visits to Segunda 2b since then have been fleeting, but they did qualify for the end of season play-offs in 2010-11 with a second place finish. After an away win in Guadalajara,  CD Mirandés was odds-on to gain a place in La Segunda for the first time, especially after taking an early lead in the second leg. However, two late goals from Guadalajara sealed the tie in their favour and condemned the club to another season in Segunda 2b.
Anduva is rudimentary, but has seen some work in the past few seasons. The main west stand, which has its bench seating truncated as it approaches the southern end, gained a new roof for the start of the 2005-06 season. This shallow cantilevered cover replaced an old propped roof that looked like it was about to crumble. Maybe this was because the original roof from the 1950's was finally condemned in 1997. Rather than replace the whole roof, corrugated sheeting was slung over the back of the stand and the old props at the front. A new changing  block incorporating a club room and offices was also added to the south west corner in 2005.
Anduva's most substantial build is the covered terrace on the east side of the ground, which holds over half of the ground's 6,000 capacity under a high propped roof. This terrace and cover dates from 1975 and is still in pretty decent shape. The newest permanent structure is the new all-seater stand went up behind the southern goal in 2010. It was officially inaugurated on 24 November with a friendly against Real Sociedad., which Mirandes won by three goals to two. The northern end featured a narrow terrace, a multitude of messy advertising hoardings and a bar in the north-east corner.

The cup run in 2011-12 saw three La Liga teams come to Anduva and suffer defeat. Following their incredible quarter final second leg victory against Espanyol, the club decided to erect a temporary grada at the northern end of the ground. 1,800 red seats were installed in time for the Mirandes semi final first leg against Athletic Club de Bilbao. A crowd of 7,700 gathered to watch Athletic win 1-2, bringing in record gate receipts of €300,000. The temporary stand was dismantlement, apart from a small section in the north-east corner.
Firmly in the public eye following last season’s cup run, the club finally won promotion to the Liga Adelente after topping Group II of Segunda B and seeing-off Atlético Baleares in the Play-off final. I think you are going to be hearing a lot more of CD Mirandés. Those clever people at euro-stades paid Anduva a visit in March 2010 and here are their pictures. 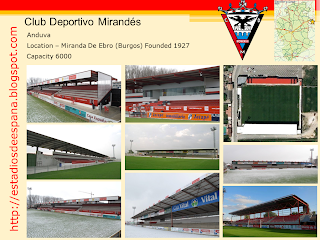