You may not know it, but this is Club Haro Deportivo's golden era. The club from the heart of the wine making region of La Rioja is experiencing the most successful period in its history. Has this slipped beneath your radar? Well I'm not surprised, you see Club Haro has become a big fish in the very small pond of Riojano football.
Formed in 1914, it has had at best a modest history, spending it's first fifty seasons in the regional leagues. Upon reaching the Tercera for the first time in 1965, Club Haro struggled to become a permanent fixture, spending only seven of the next 23 seasons at that level. Some stability was achieved in the late 1980's when it occupied a lowly place in the Tercera group for clubs from La Rioja and Navarra. After dropping back to the regional league in 1995-96, some light relief was achieved a year later, when on its return to the Tercera the club qualified for the play-offs to Segunda B. Unfortunately, Club Haro finished bottom of the play-off group and had to wait another seven seasons before it would get another stab at promotion.
Home matches back then were played at the Campo El Mazo, a basic ground to the south west of the town. It featured a raised stand on the west side of the ground, which was 45 metres in length and had a low propped roof over eight rows of bench seating. Opposite stood a curious little stand, no more than 15 metres long, that housed about 150 seats, all under a dilapidated propped roof. Club Haro finished fourth in the 2003-04 season, reaching the play-offs, where on 6 June 2004, they drew 1-1 with Sestao River at the last match at El Mazo. Club Haro lost the away leg at Sestao and thought the chance of promotion had past. However, they didn't count on CD Logroñés demotion from Segunda B and with a place up for grabs, the local federation awarded it to Club Haro.
On 26 August 2004 Club Haro opened the new Estadio El Mazo with a 2-0 friendly win over Deportivo Alaves. The stadium was just 200 metres south from the old Campo El Mazo and was designed by architect Enrique Aranzubia. The municipally owned stadium has an athletics track and three empty sides, but all is forgiven due to the striking stand at El Mazo. Aranzubia's design incorporates a semi-circular arch and suspended roof, and is like no other in Spain. All 4,300 seats are located on the east side of the stadium, with the curved roof providing cover for all but the extreme ends of the seating tier. Club Haro has continued to clock up top four finishes since returning to the Tercera, but  has failed to navigate a way through the play-offs in the past eight seasons. 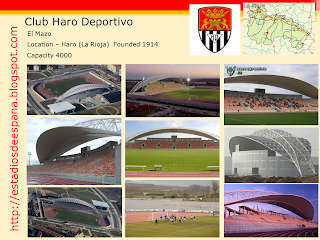