Club Deportivo Izarra hail from the western region of Navarra and the small town of Estella-Lizarra. Founded in 1924 as Izarra Beti Aurrera, the club's purple-patch came in the 1990's when it spent 8 seasons in Segunda B. It returned to the third tier in 2009-10, but after a decent start, form fell away and the club was relegated back to the Tercera.
Merkatondoa opened on 11 November 1928 and much of what you see is as a result of building that took place in the 1990's when the club was something of a Segunda B stalwart. It was smartened up at the start of the 09-10 season and an artificial surface was installed, which given that harsh winters you see in this part of Spain was a wise move. The stadium's stand-out feature, apart from a natty blue surround to the pitch, is the main stand which has a raised seated tier and propped cover. Just under 40 metres in length, it has around 170 blue & white seats in the central section and concrete benches either side. On the opposite east side is a narrow covered terrace that runs the full length of the pitch, whilst the stadium's only other terrace is found under a short cover on the north side.
Merkatondoa is a terrific little ground that has been enhanced by the recent refurbishment. CD Izarra, unlike so many other small provincial club's promoted to Segunda B in recent years, know its limits and cuts its cloth accordingly. It nearly made a swift return to Segunda B at the end of the 2010-11 season, but lost out to CD Olimpic de Xativa in the third and final phase of the play-offs. This season sees the club challenging again and who knows, it just might make it back to the third tier and stick around this time? 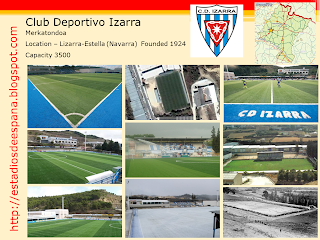 Labels: Navarra, Tercera or Below