Despite being one of Cantabria's oldest club's, Unión Montañesa Escobedo has spent most of its history in relative obscurity, emerging only every now and then to remind the footballing public that this small village side is still alive and kicking. Formed in 1917, the team spent the majority of it's first seventy years in the Cantabrian regional leagues, although it did make a fleeting visit to the Tercera for the 1967-68 season.
The team returned to that level twenty-one years later, and has remained there ever since. In 1991–92 and 92-93, Escobedo won the Tercera title and has subsequently finish in second place on five other occasions, including last season. Unfortunately, like many small clubs from the less populated regions of Spain, the play-offs are Escobedo's downfall.They have now qualified for the end of season bash on eleven occasions and have failed to progress every time. Thanks to their domestic titles, the club has competed in the Copa del Rey and has reached the third round on two occasions, losing to Malaga CF 0-3 in 1991-92 and UE Lleida two seasons later.
You wont have too much trouble finding Estadio Eusebio Arce once you arrive in Escobedo, as its 1400 inhabitants live within a village barely a mile across. The ground holds 2,000 and the main feature is a full length stand with four rows of black & white seats under a shallow cantilevered roof. An open bank of seating sits behind the east goal, whilst the rest of the ground is surrounded by hard standing. Unfortunately, Escobedo missed out on the play-offs this season, but I expect they will be back in the near future, but don't hold your breath for promotion! 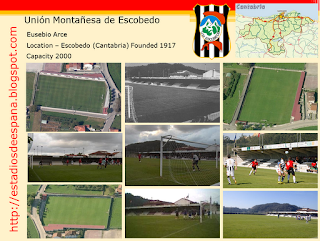