Are you ready for a rather complicated story? Allow me to introduce Real Avilés Club de Fútbol, a club that has taken on many monikers and mergers since being formed 1903 by students who were taught the game in England. This club pootled along for a few years before joining forces with Sociedad Obrera Industrial in October 1906 to form Círculo Industrial y de Sport. In 1915 the club changed its name to Stadium Avilesino, and by 1919 had absorbed all of the town's major clubs. It gained its royal pre-fix in 1925, becoming Real Stadium Club Avilesino, before settling with Real Avilés Club de Fútbol in 1941, when the Nationalist government the use of non-Spanish titles. Phew!... and that's only the start of the story.
The 1930's saw the club prosper and reach La Segunda for four seasons either side of the Civil War. After a decade or so in the regional leagues and the Tercera, Real Avilés returned to the second division for the 1952-53 season and experienced the most successful period in their history. A third place finish was achieved in that first season back in La Segunda, which was good enough for the club to qualify for the end of season promotion play-offs. Just 2 points separated the six teams in an incredibly tight play-off group, with Real Avilés finishing fifth, but only a win away from La Primera. The club played in the second tier for six of the next seven seasons, but by the turn of the 1960's, something was stirring in Avilés southern suburbs.
In 1956, Club Deportivo Llanares was formed a couple of miles or so to the south east, in the suburb of the same name. By the early sixties they had reached the Tercera and were competing head to head with the recently relegated Real Avilés. In 1965, CD Llanares became the works side of Ensidesa, a steel manufacturer that was a big employer in Avilés. Over the next decade, as Real Avilés fortunes waned, so the newly named CD Ensidesa became the town's dominant club. This came to a peak in 1974, with Real Avilés in the regional league, CD Ensidesa won promotion to La Segunda. The stay in the second tier lasted just the one season, but following the reorganisation of the leagues for the 1977-78 season, CD Ensidesa embarked on a five year stay in Segunda B. Meanwhile, Real Avilés was back in the Tercera, but was becalmed in mid-table. The next twist came with the economic downturn in the steel industry in the early 1980's

The 1982-83 season saw both clubs in the Tercera and whilst Real Avilés settled for a lowly 13th place finish, CD Ensidesa was winning the division and promotion to Segunda B. However, the fate had a trick up its sleeve as Ensidesa, the club's main sponsor withdrew its support. Faced with closure and the loss of its place in Segunda B, CD Ensidesa merged with  their cross-city rivals to form Real Avilés Industrial and took up the vacant position in the third tier. At this point, the original Román Suárez Puerta was beginning to show its age. Originally built in 1943, the ground featured a short propped stand and open terracing around an oval shaped bowl. CD Ensidesa's Estadio Juan Muro de Zaro however, featured two substantial covered stands, so the club decamped to the south east of the town. The stadium was unusual in that the western side of the stadium was made up of hoardings, due to the close proximity of a stream. Opposite this hoarding stood a large covered terrace, whilst the seating and changing facilities were housed in a substantial covered stand at the southern end. There was no permanent stand at the northern end, although temporary bleachers where used for bigger matches, like this match against Deportivo La Coruna. Initially, the merger proved problematic, with the club dropping back to the Tercera in 1985, but they soon returned to Segunda B and won the championship and promotion to La Segunda in 1989-90.
The 1990-91 season saw Real Avilés Industrial produce a very balance season of 38 points from 38 games, which earned them ninth place. The following season proved much more problematic and the club was eventually relegated after finishing 19th. The remainder of the 90's saw a gradual decline, but at the end of the decade, Real Avilés had moved back to a rebuilt Román Suárez Puerta. Their new home had a capacity of 8,000 and opened on 6 January 1999 with a friendly against Real Oviedo. The new stadium unfortunately failed to work its magic, and in June 2000 the club was relegated after losing to Novelda in a play-off. Much of the next decade was been spent in the Tercera with the club rarely challenging for promotion. That changed with a second place finish in the 2011-12 season and with it, entry into the play-offs for Segunda B. A first round loss to Coria CF appeared to put an end to any hopes of football at a higher level for at least another 12 months. However, with places up for grabs following the demotion of some clubs, Real Avilés stomped up €200.000 and bought a place in the third tier.
The club dropped the Industrial suffix from their name in 2012, which was a legacy from a merger with CD Ensidesa. The other legacy, the Estadio Muro de Zaro, has survived and is tucked away in the leafy south east suburbs of Avilés. It is mainly used nowadays for rugby and youth football. Back in the north west of town stands the club’s current home, the Nuevo Román Suárez Puerta. The whole site is dominated by two large white stands, which on first sight, appear identical. The larger of the two is the southern Grada Juan Ochoa, which has a larger upper tier and a narrow, raised lower tier, seating 2200. Opposite stands the northern Grada José Cueto  which has a single seated tier of 2000, the lower few rows of which over-hang the shingle track that surrounds the pitch. Each grada is covered with identical white cantilevered roofs, which hang low over bands of blue and white seats, leaving the interior dark and somewhat claustrophobic. This is emphasised by the oversized fascias that front both covers. The stadium’s floodlights run along the top of each stand. The stadium still  follows its original oval outline and at the western end is the original open terrace. Originally closed in 2008, this was refurbished when the club returned to Segunda B in 2012, and now features 1100 bucket seats.

With two relatively new stands and a city-centre location, the Nuevo Román Suárez Puerta should tick a lot of boxes. Sadly, despite the 2012 makeover, it is a rather soulless enclosure which lacks the intimacy and passion of its suburban cousin, the Estadio Muro de Zaro. Maybe it's a coincidence that the club's last golden period pre-dates the move to the rebuilt stadium, but Real Avilés dwindling fan-base would suggest otherwise. 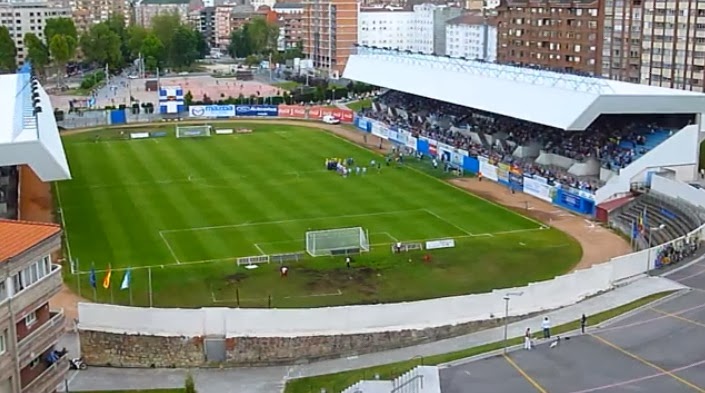 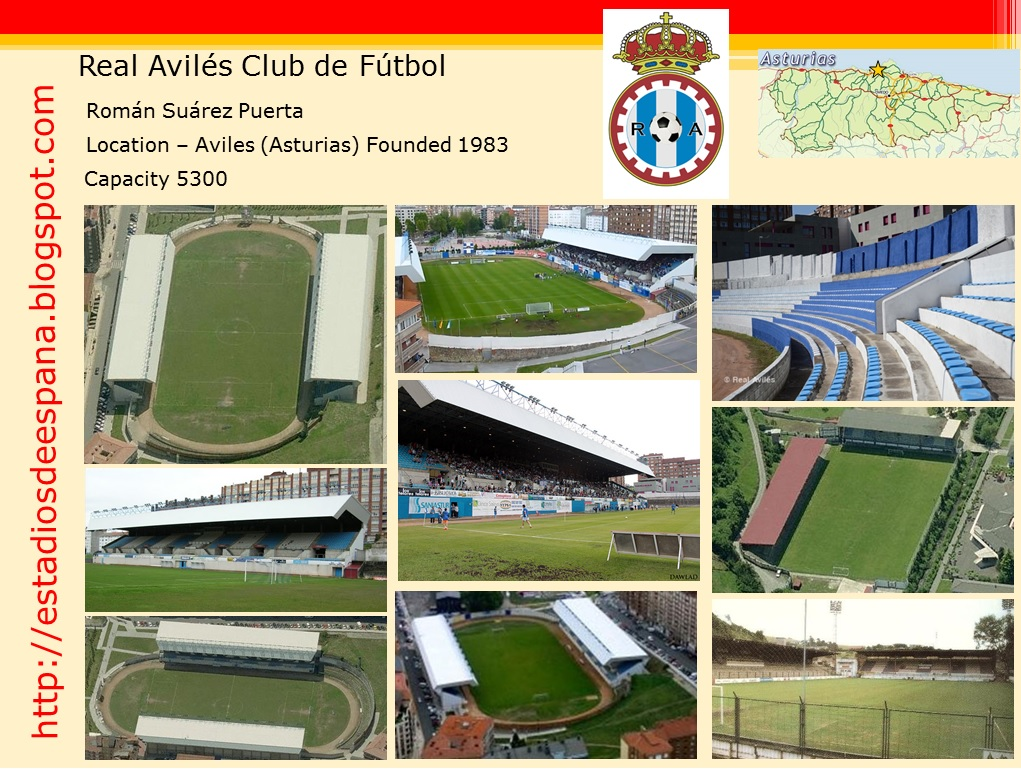 Labels: 2BG1, Asturias, New to Segunda B, Segunda 2B