Formed in 1923, Real Ávila Club de Fútbol has spent the majority of its time in the Tercera or regional leagues, but in the late 1980's they reached Segunda B and stayed for 8 years. They have fleetingly returned on a couple of occasions since, the last being in 2002-03. Since then, the play-offs have been their downfall, reaching in them in six of the past eight seasons, but failing to progress.
For that first year, the club played at El Pradillo, a basic field with a dirt pitch. On 18 October 1924 Ávila opened the the Campo San Francisco on rented land to the north of the city with a friendly against Real Madrid. They  obtained royal patronage in 1925, and despite temporarily suspending operations in 1926, the club was reformed in 1928 under the chairmanship of José Rodríguez. In 1944, Real Ávila reached the Tercera and 10 September opened a new stadium to the east of the city called the Campo San Antonio.  This featured three sides of terracing and a low covered stand. Not too many pictures exist of the stadium, but I've cobbled a couple together for you. The ground was situated to the east of the old walled city, on the corner of Avenida de Madrid and Calle de San Pedro Bautista.
San Antonio remained home for the next 38 years, but never saw football at a level higher than the Tercera. In fact, by the time it had closed in 1972, Real Ávila was in the Regional Preferente, where it would remain until 1981. For four years after the closure of San Antonio,  Real Ávila played at the Ciudad Deportiva, the municipal sports centre, before finally moving to the south west of the city in 1976. The Estadio Adolfo Suárez opened for the start of the 76-77 season and is named after the first democratically elected President of Spain following Franco's downfall, who hails from these parts. Eventually, in 1982 Real Ávila regained their position in the Tercera, and six seasons later, the club finished third in the league and won promotion to Segunda B. There followed eight successive seasons in the third tier, the club's most successful period. Since the mid nineties however, the majority of the club's time has been spent in the Tercera.
Estadio Adolfo Suárez is all a bit tired and I'm pretty certain that nothing has been added to the ground in the 35 years since it opened. It features a raised stand on the west side with a couple of hundred red seats in the central section. Either side of these seats is concrete bleachers, all covered by a shallow cantilevered roof. On the opposite east side is a raised terrace, which holds the majority of the stadium's 6,000 capacity. On opening, the stadium had a cycle track around the pitch, which has now fallen into disrepair. All in all, not terribly inspiring and all a little sad. 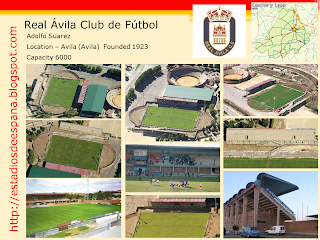