Club Deportivo Alfaro is a club from the very east of the Region of La Rioja and one that has in the past decade, stepped out of the shadows cast buy the various incarnations that have come out of Logroño . It wasn't destined to last however, and after recently spending six seasons in Segunda B, the club is now back in the Tercera.
Club Deportivo Alfaro was formed in 1922 as Club de Fútbol de S.S. Alfaro and played in the regional leagues until debuting in the Tercera in 1959. Although never seriously challenging for promotion, the club hung around at this level for eight seasons, before returning to the Tercera. Home matches were played at the Campo La Florida, which was just to the north of the centre of town, on an area that is now the main secondary school. The club moved to La Molineta in August 1975 and this had an immediate impact as CD Alfaro won promotion back to the Tercera. Regrettably, this was a brief visit and they dropped back into the regional leagues a year later, where they would stay until 1981. Over the next 20 seasons, CD Alfaro made little impact on the Tercera, but this changed in 2001, when a third place finish earned them a spot in the promotion play-offs. On 17 June 2001, a 5-1 victory over Aurrera Ondarroa earned the club promotion to Segunda B. The 2001-02 seasons proved difficult and although not disgraced, the club finished bottom of the league, 9 points from safety.
A season later and CD Alfaro had won promotion to Segunda B again, and this time they stuck around for a little longer, finishing as high as ninth in 2003-04. The club rallied following relegation in 2007 and won its first Tercera league title at the end of the 07-08 season. The club's promotion hopes appeared dashed, when they lost 3-5 on aggregate to Tudelano. However, CD Logroñés latest demotion saw CD Alfaro reprieved and offered a place in Segunda B. For the duration of the 2008-09 season CD Alfaro was the region of La Rioja's top dog. Not that it counted for much as the club was relegated back to the Tercera after finishing nineteenth.

La Molineta looks much older than it actually is, having been inaugurated in August 1975. Its dominant feature is a raised stand with a propped cantilevered roof, that straddles the halfway line for 60 metres.  This has 1000 white seats that were were added to the original concrete bleachers in 2008. The stadium's floodlights were added in 2001 following the club's first promotion to Segunda B. A gravel track surrounds the pitch and the rest of the capacity is made up of hard standing. Rather rural, but pleasing all the same. 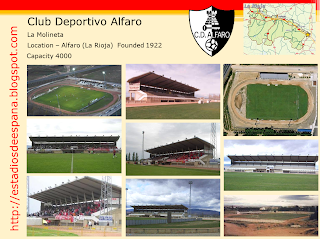