El Mayayo was the home of Sangonero Atletico CF from 1996 to their demise in July 2010. The club had achieved stability in the Murcian Tercera division, before gaining promotion to the Segunda B in 2008. One of  the favourites to be relegated, the club confounded the form book to finish the 2008-09 season in ninth position. A twelfth place finish followed in 2009-10, but with accumulated debts of 340,000€, the club folded and its berth in Segunda B was purchased by Lorca Atletico CF.
At the start of the 2010-11 season  Costa Calida CF moved to El Mayayo and settled in to their new surroundings very well, eventually winning Tercera Group 13 before losing to Marino du Luanco and Arrandina in the play-offs. During the summer of 2011, the club changed its name to UCAM Murcia CF following a sponsorship deal with Universidad Católica San Antonio de Murcia. The 2011-12 was not quite as spectacular with UCAM finishing in sixth place, some 20 points of the play-off positions. However, after all the end of season shenanigans UCAM found themselves in Segunda B. Orihuella CF was demoted after failing to pay they €200.000 bond to the RFEF, and with the university guaranteeing UCAM's bond, a place in the third tier was theirs. UCAM made a dreadful start to life in Segunda B, failing to win any of their first 16 fixtures. However the team was transformed in the second half of the season and just missed out on safety, finally finishing 17th.
El Mayayo was extremely basic, with open temporary seated stands on the west side of the pitch and to the north, a club house come changing block. It was developed to a degree in 2011, when a basic short cantilevered stand was erected on the west side of the ground. 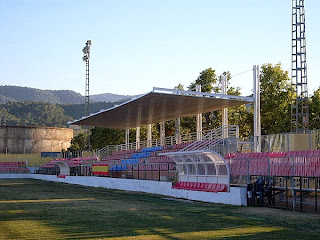 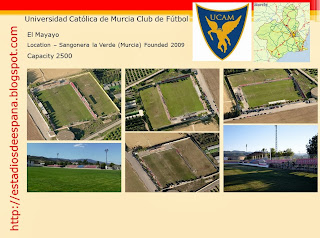