July 2010 was not a great month for Murcian clubs, as along with Águilas, Mazarrón lost its established club Mazarrón Club de Fútbol. In their place has sprung up Mazarrón Fútbol Club who now play in the Preferente Autonómica, and use the same stadium as their predecessor, the Estadio Municipal de Mazarrón.
Mazarrón Club de Fútbol was founded in 1969 and apart from the 1982-83 season, when they reached the Tercera, its first thirty-odd seasons were spent playing in the regional leagues. Promotion back to the Tercera arrived for the 2000-01 season and over the next seven seasons, the club made steady progess. This  culminated in a second place finish in 06-07, followed by play-off victories over UP Langreo &  Egüés. Mazarrón CF made a steady start to life in Segunda B, occupying eighth place at the mid-way point. Poor form followed and the club was drawn into a relegation battle, which it ultimately lost on the final day of the season in a 3-0 reverse at Betis B. The club tried to make an immediate return to Segunda B in 2008-09, but fell short with a sixth place finish in the Tercera. With a drastically reduced budget for the 2009-10 season, it came a no surprise to see the club struggle. It eventually finished 18th and folded in the summer of 2010.
The Municipal de Mazarrón is probably the most basic stadium to have hosted football in Segunda B in recent seasons. Opened in 1928, it would be fair to say that not a great deal of development has occurred in the intervening years. The three open sides of the ground feature two deep steps of terracing, painted in the club colours of red & blue. On the southern side is a raised seated area which is no more than 20 metres in length. Either side of the stand are three rows of red & blue buckets seats., which have been bolted to the existing terrace. For the duration of the 2007-08 season in Segunda B, the raised seated area sported a temporary roof. You know the sort, you see them flapping about in the rain at the Eastbourne Tennis Tournament. Its all very basic, but with the new Mazarrón CF playing in front of barely 100 supporters, its all that's required. 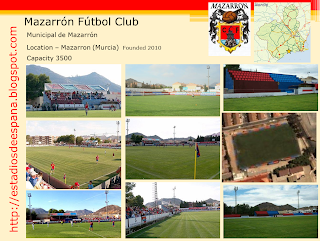