In May 2011 Caravaca CF had just completed their second season in Segunda B. Whilst their points total may not have matched the previous seasons sum of 52, they had done enough to safely secure another season in the third tier. Then in the middle of July 2011, owner Andrés Marcos decided to move the club 75 miles south east to the small mining town of La Union.
The move was conducted without consulting either the fans groups or the local municipality, with Marcos citing a lack of support from all parties his actions. The move was challenged, but Marcos had done his homework. By selecting another location that fell within the boundaries of the Federación de Fútbol de la Región de Murcia, the club was technically just switching stadiums. With the fans and the Ayjuntamiento de Caravaca powerless, Club de Fútbol La Unión kicked off the season at the equally basic Estadio Municipal La Unión in front of a crowd that numbered less than 100. If you had hoped or expected the club to crash and burn, you would be disappointed. Whilst stuck in a relegation battle, they are hanging on in there, but what the future holds is anybodies guess.
The town of Caravaca does not have much in the way of footballing pedigree. Prior to Caravaca CF's promotion to Segunda B in 2009, it had spent much of the previous thirty years in the Tercera, rarely threatening an escape at either end of the league. Formed in 1967 to coincide with the opening of the Estadio El Morao in the neighbourhood of Villapatos, Caravaca CF was the second senior team to represent the city. The first was also called Caravaca CF and played at the Campo del Junquico from 1950 until folding in 1960. As for El Morao, well it is extremely basic, featuring an uncovered wedge of seating on the west side of the ground and narrow strips of hard-standing and temporary seating elsewhere. With what little money available to the local municipality being invested in a multi-purpose sports complex nearer the centre of town, it seems destined to remain underdeveloped. Pictures of this ground are few and far between, but in all honesty, there isn't a lot to photograph. 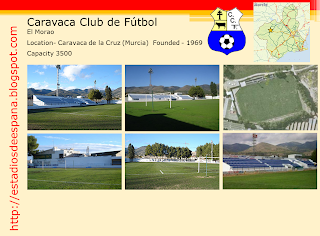