“There’s some corner of a foreign field that is for ever England”. Well Rupert Brooke was not thinking of Torrevieja when he penned The Soldier, but look a quick look around this medium sized town and you'd be forgiven for thinking you were back in Blighty, weather aside, of course. It would appear to the casual observer that this corner of South East Spain has been vacated by the Spanish and turned over to the English. The statistics add some credence to this argument with less than half of the town’s population of 104,000 being Spanish, many of whom only spend a few months of the year in their holiday homes.
The local team FC Torrevieja, has a distinctly English feel to them as well. Backed by the self-styled “Torry Army”, the club has in recent years come close to promotion from the Tercera on two occasions, the most recent being a play-off defeat to Haro Deportivo at the end of the 2008-09 season. Two seasons of mediocrity and financial woe seems to have prompted a war of words between differing factions within the club, all of which has seen the club becalmed in mid-table.
Torrevieja did not have a senior team playing regional football until 1971, when Torrevieja Club de Futbol were formed and started to play at the recently built Estadio Vicente Garcia. They reached the Segunda 2b in the mid-eighties, but by the mid nineties had folded. In 1993 Club Deportivo Torrevieja was formed and worked its way through the regional leagues to reach the Tercera in 1998, by which time they had changed their name to FC Torrevieja. Since 2005, the club has resided in the Tercera.
The ground is fairly typical of the smaller stadiums that were built in Spain in the 1960’s and early 1970’s. It’s square with slightly cranked terraces, rounded corners and a short, simple cover on one side. Seating has be added to the steps either side of the stand. It offers nothing that could be classed as even moderately pleasing, in fact it all a little tired. I do however, like the way the slightly grand entrance to the ground builds up your hope, only to reveal something shabby inside. 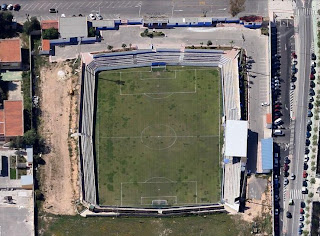 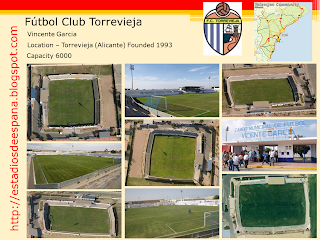