Club Deportivo Quintanar del Rey was formed in 1984 and arrived in the Tercera 15 years later. Their most successful period followed soon afterwards, with two titles and a runners-up position between 2001 & 2004. Unfortunately, their four appearances in the play-offs during this period didn't amount to anything. Things have cooled a little of late, with a visit back to the regional league for the 2008-09 season.
Quintanar del Rey is in the extreme south of Cuenca, on the border with Albacete and with a population of just 15,000, it is the third largest town in the province. You’ll find San Marcos at the north end of the town and very neat and simple it is to. A short seated enclosure sits on the west side, whilst opposite, an equally short roof partially covers a terrace that runs towards the south-east corner.
The brightest feature in the ground however, is found in the north-east corner. It's the club house, which features the changing rooms, directors lounge and bar, is a white and blue two-storey building, with two large semi-circular windows either side of the players entrance. 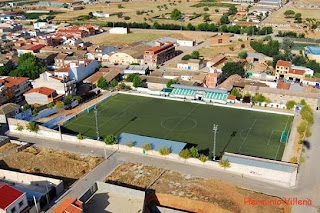 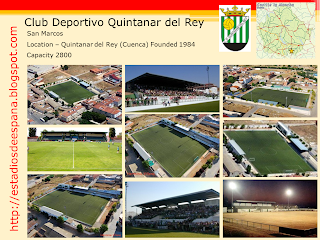