It’s easy to miss La Nucia, I did earlier when I shot off to Alcoy and by-passed the small town of 20,000 inhabitants, around 6 miles north of Benidorm. CF La Nucia is a relative new comer to the Spanish football scene having been formed in 1995 and for the first decade or so, spent its time in the lower regional leagues.
Having reached the Regional Preferente (Level 5) in 2006-07, they surprised everybody by finishing fourth and qualifying for the play-offs to the Tercera. In the final round, they were pitted against Olimpic de Xativa, and having drawn the away leg 1-1, things were looking very promising with the scores at 0-0 in the 93rd minute of the second leg. Then this happened. Resigned to another season in the Preferente, La Nucia was reprieved when CF Dolores stood down from the Tercera and the Valencian Football Federation offered their place to the club. And they have taken the opportunity with both hands, finishing third and reaching the play-offs in three of the past four seasons.
The Estadio Camilo Cano is part of the town's Instalaciones Deportiva, or sports centre and was already reasonably well developed prior to their promotion to the Tercera. The main stand is on the west side of the ground and runs for 60 metres from the southern corner. It has a canopy roof, propped behind the back of 10 rows of red & black seats. The roof is similar in design to the one that went missing at Villajoyosa... hang on, let me check my dates before casting aspersions. The rest of the ground is made up of narrow banks of red and black seats, the eastern side having a thin cover, similar in design the main stand. With an overall capacity of 4,000, it is perfectly adequate for the club in their current position or if they reach Segunda 2b. 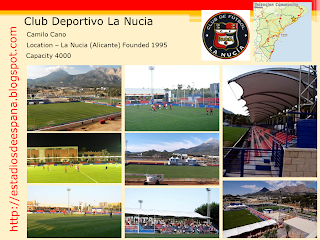