Head North West from Alicante, high into the Sierra del Cid and close to the Murcian border you’ll find the town of Elda. The local team, Club Deportivo Eldense was formed in 1921 and for a short spell in the mid 1950’s and early 1960’s graced La Segunda. However for the majority of its 90 years, the club has played in the Tercera.
Eldense first reached La Segunda in the 1956-57 season, finishing 16th and entering the relegation play-offs. Here they faced Calvo Sotelo and all seemed lost after a 4-1 defeat in Puertollano. However, in the second leg, Eldense racked up seven goals without reply and retained their position in the second division. The following season saw the club finish eighth, but they returned to the Tercera in 1959 when they finished bottom of Group II of La Segunda. A second spell in the second tier followed in 1962-63 and the club recorded it best finish with seventh place. Their frailties were exposed a year later, when Eldense finished rock bottom once again. During Eldense's golden period, home matches were played at El Parque, a basic enclosed stadium with four open terraces. Work had started on the new stadium when the club was in its final season in La Segunda, and it was inaugurated in September 1964 with a visit from Real Madrid.
Estadio Pepico Amat is rather deceptive and looks as though it could hold more than its 8,000 capacity. The dominant feature is the single tiered stand with its shallow cantilevered roof and bright bands of red and blue steps, no seats, just steps. The roof was added in 1988, but everything else looks pretty much as it did back in 1964. Six steps of terracing run around the rest of the ground until you reach the South East corner. Here you’ll find a thin wedge of more substantial terracing which seems to have been inserted, almost as an afterthought or cut price homage to bigger, more famous spion kops. Everything was given a lick of paint when Eldense were last promoted to Segunda 2b for the 2006-07 season, but they returned to the Tercera a year later.
The stadium's days were however numbered. The municipality wanted the land for a new shopping & leisure complex and started work in 2011 on a 4,000 all-seated stadium just to the south of the existing ground. Progress was slow, but finally, Eldense played their last game at the Pepico Amat on 26 August 2012 when they drew 0-0 with Orihuela. The new stadium features a raised stand on the west side, which is covered by a cantilevered barrel-vaulted roof. Three open terraces complete the enclosure which also features an artificial pitch.
After much delay, and a home match played a few miles to the south west at the Municipal de Monòver, Eldense finally got to inaugurate their new stadium, with a 1-0 victory over CF Borriol on 30 September 2012, in front of 2,000 fans. 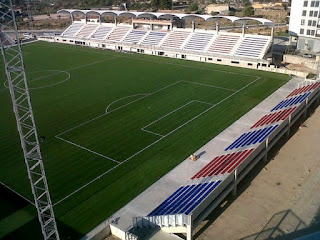 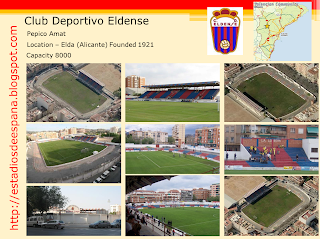